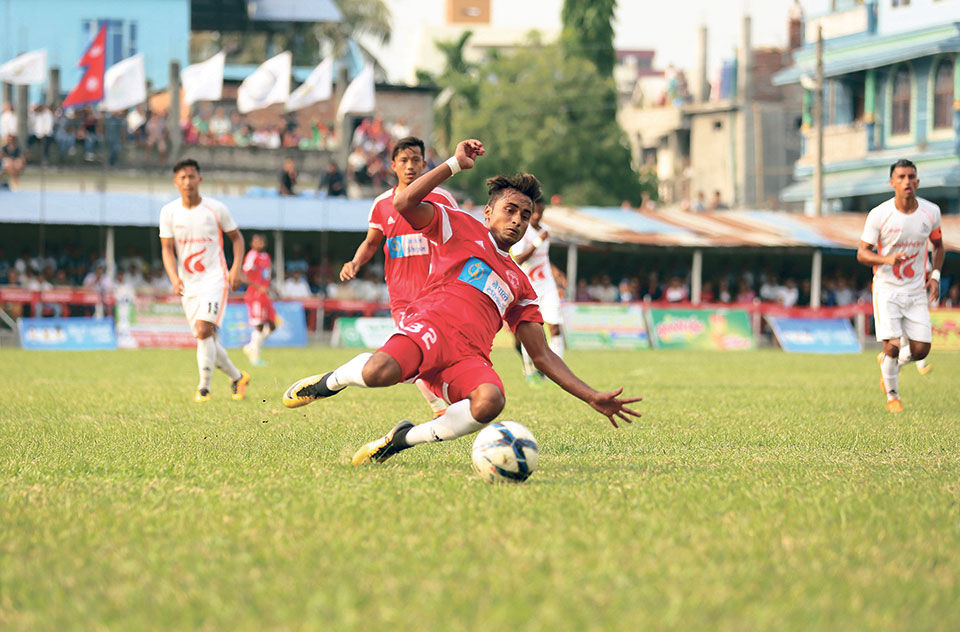 A player of Nepal Police Club in action against Armed Police Force during a semifinal match of the Damak Gold Cup football tournament in Jhapa on Tuesday. Photo: Yubaraj Bibas/Republica

Nir Kumar Rai headed past the Armed Police’s goalkeeper in the 38th minute, which decided the game as Armed Police failed to equalize in the regulation time. Nepal Police will play either Tribhuvan Army Club or Manang Marsyangdi Club, who will meet in the second semifinal match on Wednesday.
Displaying an aggressive football, Nepal Police dominated the game since the first whistle. Dinesh Rajbanshi headed a cross from Ajit Bhandari in the 12th minute, but it sailed over the crossbar. Likewise, Abhishek Rijal’s shot in the 21st minute failed to hit the target.

Armed Police, who failed to play to their fullest in the first half, showed some improved performance in the second half.  Hari Karki’s shot was saved by Kiran Chemjong in the 67th minute. Similarly, Chemjong again made a save off Sudeep Shikhakar’s shot in the 73rd minute.

The only goal scorer of the match, Rai was adjudged man-of-the-match. He bagged a purse of Rs 11,000.

One arrested with pistol in Sarlahi
35 minutes ago