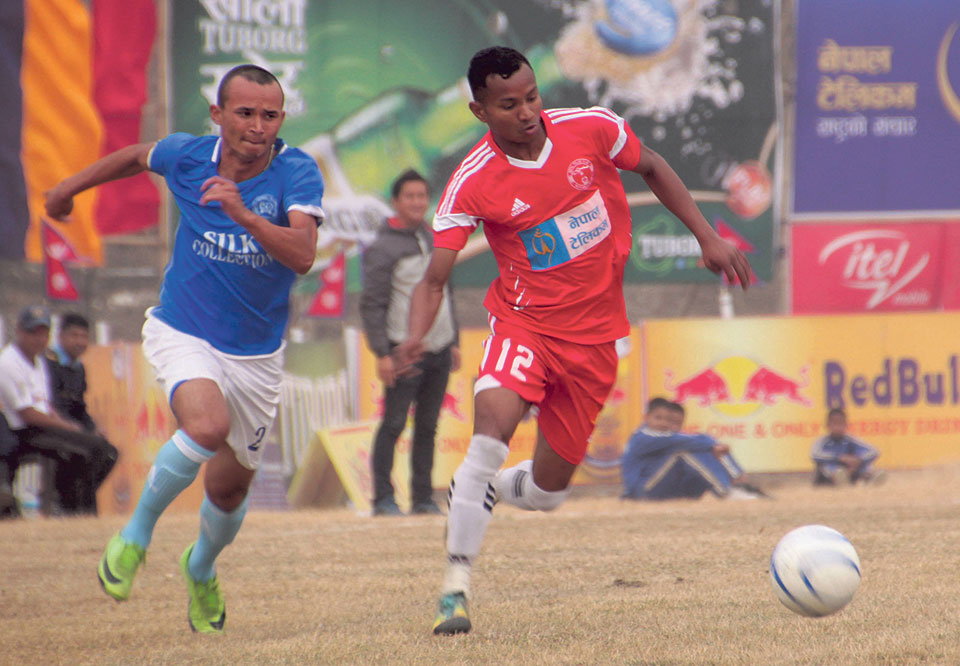 At the match played at Dharan Stadium, the departmental team scored a goal in each half to seal the win. NPC went ahead in the 20th minute through Kakarbhitta’s own goal when Rejin Subba’s shot went into the back of the net deflecting from Bikash Thulung’s leg, while Suman Lama doubled the lead with a brilliant acrobatic goal from a Rabi Paswan cross in the 64th minute.

Sankata, who worked hard going forward in the latter stages of the match, could not get a goal.
Lama was named the man-of-the-match and got Rs 10,000 in prize.

NPC got several chances in front of the goal. Paswan’s shot in the 10th minute, after he beat the goalkeeper, was cleared by the defenders, while Buddha Lama dribbled past the defenders in the 48th minute of the match, but could not direct it goalwards.

The second half also saw the departmental team throwing series of chances to score. Nir Kumar Rai’s shot was punched by the Kakarbhitta goalkeeper in the 62nd minute, while Rai’s 87th minute strike hit the post.

Kakarbhitta also created many opportunities, but could not utilize it. Alin Laxsam’s freekick in the third minute was punched by NPC goalkeeper Satrudhan Chaudhary, while he saved a 22nd minute strike by Bikash Limbu. Likewise, Dipak Rai got two chances in the 34th and the 55th minute, but Chaudhary denied him.

NPC’s head coach Ananta Raj Thapa said that the players played according to his tactics and they got the result they wanted.

Kakarb hitta’s head coach Min Bahadur Basnet said that his players could not perform well as they were tired after playing the semifinals in Rajgadh. But, he also blamed the referees for their decisions.

“We did not get penalties on three occasions when it was handball all three times. We conceded an own goal in the counter attack from the first handball inside the box, which was not penalized,” Basnet said. “It’s not good to not give three penalties in such a big event. The players played well despite being tired.”

Biden White House asks 'Trump who?' ahead of speech to conservatives
20 hours ago

In his written response to SC, Dahal says courts can never be influenced by rallies, slogans and speeches
35 minutes ago