Nepal pledges to contribute up to 10,000 troops in UN peacekeeping 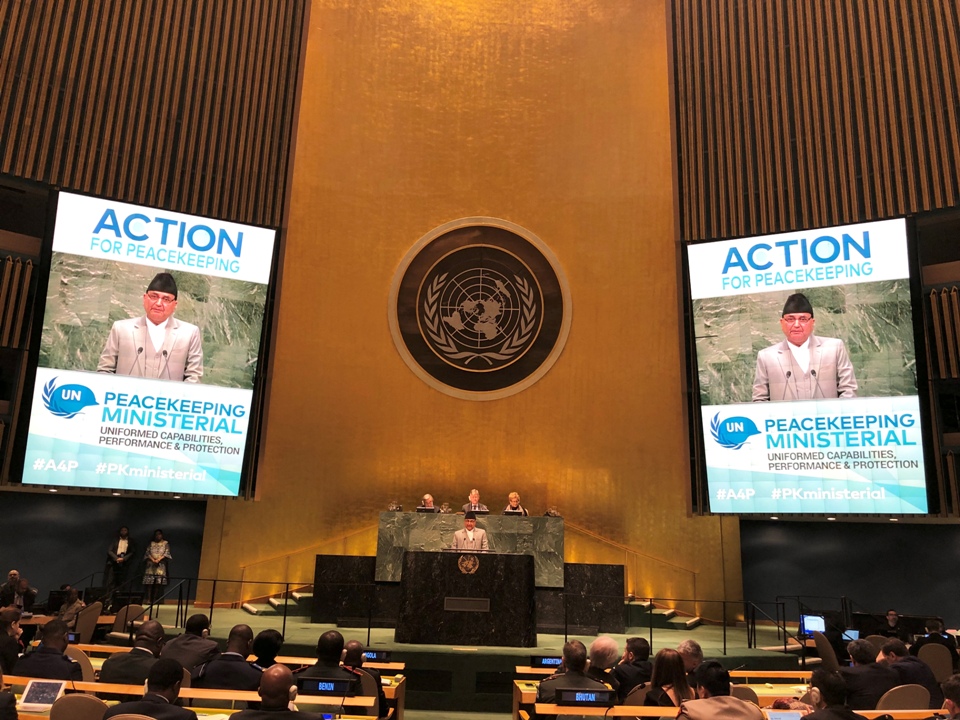 KATHMANDU, March 30: Deputy Prime Minister and Minister of Defence Ishwar Pokhrel addressed the ‘UN Peacekeeping Ministerial Conference on Uniformed Capabilities, Performance and Protection’ as the leader of Nepali delegation at the UN Headquarters in New York on Saturday.

Highlighting Nepal’s 61 years of partnership with the UN on peacekeeping operations, he reiterated Nepal’s commitment to contributing up to 10,000 troops at the request of the United Nations, according to a press statement issued by Nepal's Permanent Mission to United Nations based in New York.

Pokhrel pledged an Infantry Battalion, a Force Protection Company, two Formed Police Units, individual police officers, and staff and military observers in the Peacekeeping Capability Readiness System (PCRS) for the year 2019-20. He also pledged a special force company at the Rapid Deployment Level of the PCRS.

He stressed the need for a renewed focus on substantive and sustained capacity building efforts for the improvement of peacekeepers’ performance.

“Nepal is ready to offer training opportunities and provide its Training Center’s facilities, administrative support and instructors for any capacity building efforts in future”, he stated.

He underscored that Nepal had already met the UN targets with regard to the participation of female peacekeepers as Staff Officers, Military Observers and Individual Police Officers. He also called for more representation from troops and police contributing countries at the senior-level leadership positions, both at the UN Headquarters and in the field missions.

Meanwhile, Pokhrel attended a luncheon reception hosted by the UN Secretary-General in honor of the visiting ministers and heads of delegation participating in the Conference.

Later in the evening, he attended a dinner reception hosted in his honor by Ambassador/Permanent Representative Amrit Bahadur Rai at the latter’s official residence.

Nepali delegation participating in the Conference also included Ambassador/ Permanent Representative Rai and officials from Ministry of Foreign Affairs, Nepal Army as well as the Permanent Mission of Nepal to the UN.

What you might be missing while using Microsoft Windows

A keyboard shortcut is a set of one or more keys that invoke a command in software or an operating... Read More...

KATHMANDU, March 3: Investors from various countries have pledged to invest more than Rs 1100 billion in various projects during... Read More...