Nepal ousted from U-15 Women’s Championship 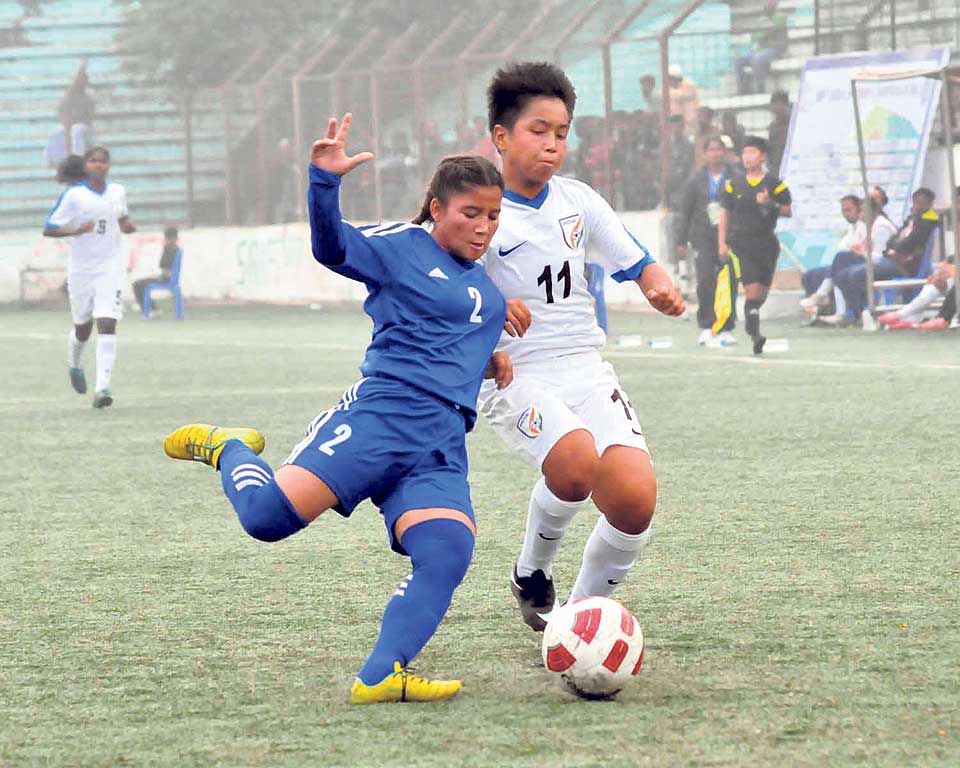 Players of Nepal (blue) and India vie for the ball during their SAFF U-15 Women’s Championship football match at the Bir Shreshtha Shaheed Mostafa Kamal Stadium in Dhaka, Bangladesh on Tuesday. Photo Courtesy: NSJF

KATHMANDU, Dec 20: Nepal has crashed out of the SAFF U-15 Women’s Championship after facing a 10-0 defeat to India, in its second match on Tuesday.

Nepali young girls had suffered a 6-0 loss at the hands of host Bangladesh in the first match on Sunday.

With two defeats in a row, Nepal faced an early exit from the inaugural edition of the championship, held in round-robin format in Bangladeshi capital Dhaka.

Acquiring highest points in the league round with two wins each, India and home team Bangladesh have set for the title clash.

Finalist Bangladesh that had beaten Nepal in its first match on the opening day recorded a 3-0 win over the Bhutanese side in its second match.

Before returning home, Nepal will take on winless Bhutan on Thursday.

Likewise, Santhiya Vengadajalam and Pusparani Chanu added one goal each.

Serto gave an early lead to the Indian side scoring an opening goal in the fourth minute. Munda doubled the tally in the 23rd minute while Serto scored her personal second in the 31st minute to make 3-0.

Likewise, Santhiya struck India’s fourth goal in the 40th minute and one minute later Naorem made 5-0 who also netted her personal second goal in 52nd minute.

Munda netted another goal in the 62nd minute whereas Chanu made 8-0 in the 69th minute. Naorem and Munda completed their hat-tricks by scoring goals in the 75th and 86th minutes respectively to help India register a big-margin win over the Nepali side.

Leadership Development: The Peril of Ignoring the Emotional Domain
22 minutes ago