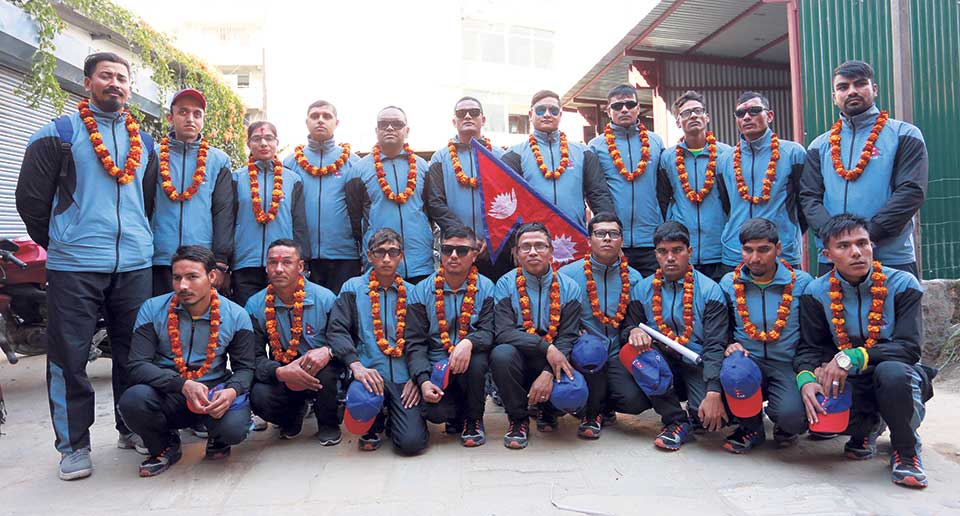 Members of Nepal’s blind cricket team pose for a group photo during a farewell in Kathmandu on Tuesday.

KATHMANDU, Jan 3: Nepali team left for Pakistan on Tuesday to participate in the fifth edition of ODI World Cup of the blind. This will be Nepal’s first participation in the summit tournament.

The Nepali team, which has already gained experience of the T20 World Cup, will start their campaign by facing Bangladesh on January 8.

Nepali team’s skipper Kritan Shrestha Duwal said that despite a lack of opportunity to train well for the World Cup, they were determined to give their best at the game.

“We could not train properly due to lack of a training ground,” said Duwal, adding, “Only recently, we have been able to train at the Mulpani Cricket Ground.”

“We have three new players in the team and we have already beaten strong teams like South Africa and New Zealand in the T20 format. So, we have strong morale ahead of the tournament. Our main goal is to win the World Cup.”

The head coach of the Nepali team, Rijan Praju, said that even though participating in the World Cup was a matter of pride for the team that is neglected by the government, the Nepali team will compete for the title.

Pawan Ghimire, president of the Cricket Association of the Blind, said that the Nepali team has been regularly participating in international tournaments. Stating that they will always play for the nation’s glory, he rued poor investment in the game. He urged the state to bring in more investment for the blind cricket.