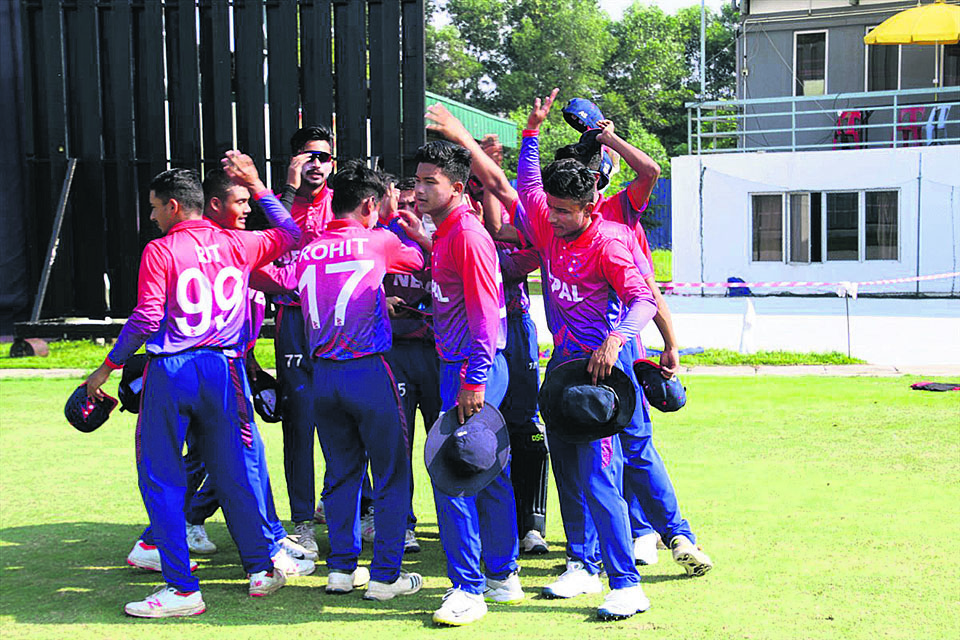 Players of Nepal U-19 cricket team hurdle before their ICC Asia U-19 World Cup Qualifier match against Kuwait U-19 at the Kinrara Academy Oval in Kuala Lumpur, Malaysia on Thursday. Photo Courtesy: Raman Shiwakoti

KATHMANDU, April 19: With the completion of all the five matches of the ICC Asia Under-19 World Cup Qualifier on Thursday, Nepal failed to qualify for the ICC U-19 Cricket World Cup to be held in South Africa in 2020 despite that Nepal won four of the five matches with good performance throughout the league.

Nepal stood second as the United Arab Emirates maintained its unbeaten streak outshining Oman U-19 by 10 wickets in a match played at Bayuemas Oval in Kuala Lumpur in the fifth match on Thursday.

Only a single team on the top of the points table is qualified for the World Cup.
In its fifth match on Thursday, opening batsman Rit Gautam scored maiden half-century to help Nepal U-19 cricket team oust Kuwait comprehensively by eight wickets to finish the ICC Asia Under-19s World Cup Qualifier on second position in the final league match played at Kinrara Academy Oval in Kuala Lumpur, Malaysia.

With five wins out of five matches, the UAE has 10 points followed by Nepal on second position with 8 points. Nepal had lost to the qualifying UAE team by a run by DLS method after the match was interrupted and abandoned due to rain on April 13.

The UAE was batting on 122 runs for the loss of 3 wickets in the 30 overs chasing the target of 248 when the rain arrived.

The player of the match of last league game, Gautam, smashed seven boundaries during his 84-ball stay at the crease and shared an opening partnership of 93 runs with Pawan Sarraf chasing the target of 158 runs.

Sarraf scored 53 runs from 61 deliveries which included eight boundaries and a six. Gautam further added 47 runs with number three batsman Aasif Shiekh to secure the eight wickets win in 28 overs.
Aasif remained unbeaten on 33 runs from 20 deliveries which included five boundaries and a six. Hamoud Amanullah and Abdul Sadiq were the only wicket-takers for Kuwait in the match sharing a wicket each.

Earlier, Nepal had won the toss and invited Kuwait to bat first. Nepal made two changes as Rashid Khan and Aasif Shiekh came in to replace Kamal Singh Airee and Avishek Basnet in the playing XI. Both the teams with three wins each in the league and fair chance of qualification were predicted to give close competition to each other with sights on result of the UAE versus Oman match.

However, skipper Rohit Kumar Paudel shuffled his bowlers to dismiss Kuwait for 157 runs in the last over of the first innings. Eight different bowlers were used to take nine Omani wickets to fall. The most prolific batsman of the league, Paudel led the team with the ball picking up three wickets in three overs conceding 23 runs after introducing himself as eight bowlers of the innings.

Paudel was helped by Kusal Malla, Rashid Khan and Surya Tamang’s two wickets each in the match. The 10th wicket was a run-out of Oman’s best batsman of the day Noman Budroo. The wicket-keeper batsman made 70 runs, the highest of the match, from 120 deliveries which included eight boundaries. Similarly, Gokul Kumar scored 36 runs at top of the innings with no meaningful contribution from any other batsmen.

Nepal concluded its qualification campaign with four wins in five matches and UAE advancing to world cup with five wins.

In other match of the day, host team Malaysia defeated Singapore by four wickets to secure the fourth position on the points table in a match played at Selangor Turf Club in Kuala Lumpur, Malaysia. The home team chased the target of 142 runs in the 30th over losing six wickets after bundling Singapore for 141 in 48.1 overs.