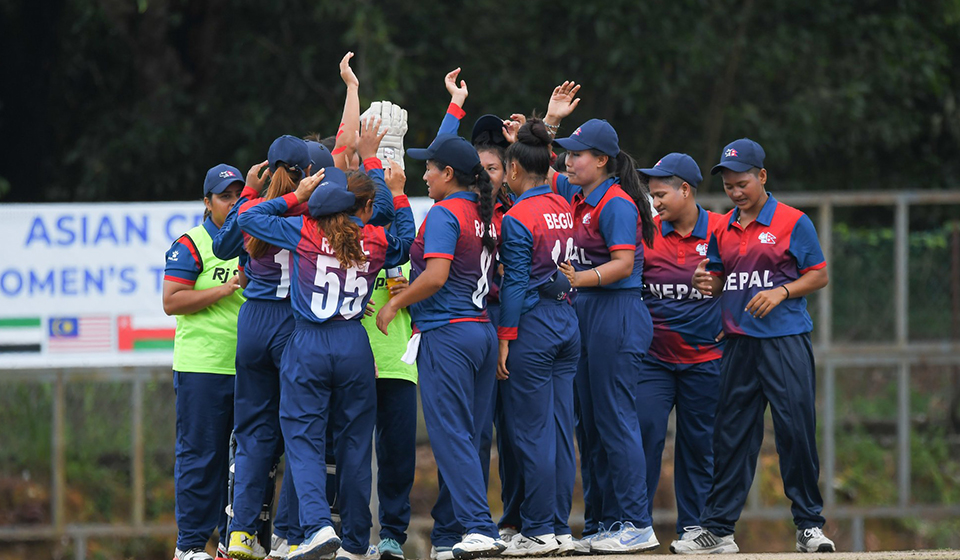 KATHMANDU, June 20: Nepal has entered the semifinals of the ongoing 2022 ACC Women's T20 Championship in Malaysia by defeating Bahrain by eight wickets in a match at the Kinrara Oval Ground today.

Chasing the 15-run target posted by Bahrain, Nepal achieved it in 3.4 overs losing two wickets. The match was shortened to 7 overs due to rain.

Invited to bat first after losing the toss, Bahrain made 14 runs in seven overs at the loss of six wickets. Bahrain's Ishara Suhun made six runs while Capitan Deepika Rasangika and Vice-Captain Tharanga Gajanayake made  two runs each. For Nepal, Kabita Kunwar and Sabnam Rai claimed two wickets each while Ashimina Karmacharya took one wicket.

Categorized into Group 'B' Nepal has topped the group with six points through three wins in three matches including this one. Earlier in its first match, Nepal beat Bhutan by 50 runs. Likewise, in the second match, it defeated Kuwait by 25 runs. It is facing Hong Kong tomorrow (June 21).

‘Chatpate and Panipuri’ banned in Lalitpur Metropolis from Saturday
20 hours ago
Constructive Neutrality: Dynamicity of Nepal’s Foreign Policy
3 hours ago

One arrested with marijuana
16 hours ago

Three were ‘playing’ with a pistol; one injured, two arrested
16 hours ago