KATHMANDU, July 24: Nepal national cricket team has suffered a humbling four-wicket defeat at the hands of Qatar in their opening ICC World T20 Qualifier in Singapore on Tuesday.

At the Indian Association Ground, Nepali batsmen could not perform consistently after the first three batsmen were out for 67 runs within 10.1 overs.

Then the successive wickets of middle order batsmen Binod Bhandari, Dipendra Singh Airee and Karan KC were gone from 17.4 to 18 overs.

Earlier, Nepal won the toss, elected to bat first and presented a small target of 123 runs at the loss of all its wickets inside the allotted 20 overs.

In reply, Qatar chased the target hitting 124 runs for the loss of six wickets with four balls still remaining to face.

The win came with Inam-Ul-Haq’s long-stay in the crease who hit 41 runs before being run out in the fourth ball of the 13th over.

Nepal’s Airee hit the highest 34 runs off 35 deliveries for the losing team, which included a six and a four, while recently turned opener and captain Paras Khadka scored 28 runs off 17 balls with a six and four boundaries before going out at the end of the sixth over.

Khadka’s opening partner Gyanendra Malla added 23 runs off 24 balls including a six and two fours, but he did not bat longer after being caught out by Iqbal Hussain in 8.2 overs.

Sompal Kami initially showed some signs of holding the innings for the team, but he faltered as well by hitting 11 runs off 12 balls with a four.

All the other batsmen failed to reach double figures, while the last three balls of the innings saw Nepal lose all its wickets.

Hussain was tremendous with the ball as he pocketed three wickets giving away 21 runs in his four-over spell.

Also, Inam-Ul-Haq claimed a wicket for the winning side.

He was supported by Nouman Sarwar, who scored 22 runs off 15 deliveries including two sixes and two fours, one of which won the game for the team.

Also, Mohammad Rizlan was not out for nine, while captain Tamoor Sajjad added nine as well before getting run out.

Sandeep Lamichhane picked up three wickets despite conceding 33 runs in four overs, while Karan KC picked up a wicket in the same number of overs.

It was a strange bowling strategy from Khadka as he only let Kami bowl an over, which saw him concede 13 runs.

Inam-Ul-Haq was named the player of the match.

In the other game of the day, host Singapore and Kuwait shared a point each after rain abandoned the match without a single ball being bowled.

Singapore stands tall in the group table as of now with three points from two games.

Malaysia, playing one game, and Qatar are second and third with two each. Kuwait is fourth on a single point, while Nepal is pointless after one game.

Nepal will take on Malaysia in the first game on Wednesday, while Kuwait and Qatar go head-to-head in the second. 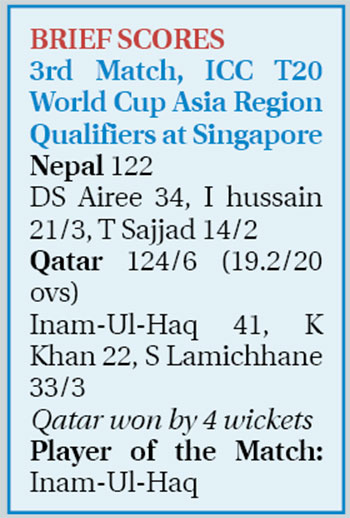 ‘Diplomatic note’ sent to India seeking action against dissemination of blasphemous material about Nepal, its political leadership
9 hours ago