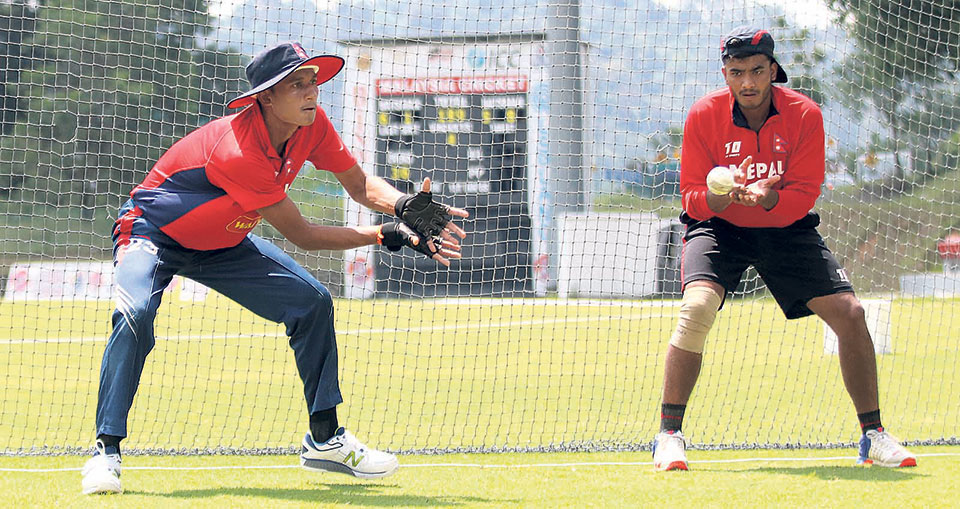 Nepal’s Kishor Mahato and Kamal Singh Airee (right) during a practice session in Malaysia on Thursday ahead of their Friday’s ACC U-19 Youth Asia Cup semifinal match against Afghanistan.

KATHMANDU, Nov 17: Beating India by 19 runs and advancing to the semifinals in ACC U-19 Youth Asia Cup for the first time has been a big success story for the young Nepali cricketers.

Nepal faced a two-wicket defeat at the hands of Bangladesh in its first group-stage match, but made a scintillating comeback by beating defending champions India to create history.
Nepal also overcame host Malaysia by eight wickets on Wednesday.

Rahul Dravid’s side expected to beat Nepal with ease, but as skipper Dipendra Singh Airee put on quite a show by scoring 88 runs and taking four wickets, the game made an unexpected turn.
Nepal finished second in the group with four points, while Bangladesh garnered six points.

India, managing only two points, crashed out of the tournament and failed to make semifinal berth.
Head coach of Nepal Binod Das termed the victory against India ‘historic’ and credited the team for their ‘hard work’ and ‘faith’.

Nepal will now look for more glory when it faces Afghanistan in the second semifinals of the tournament.

The Afghans made to the last four by finishing first in Group B that consisted of Pakistan, Sri Lanka, and United Arab Emirates (UAE).

Afghanistan defeated Pakistan in its first group match by seven wickets and UAE by 134 runs in its last, but succumbed to Sri Lanka by 61 runs in its second.

Afghanistan, Pakistan, and Sri Lanka accumulated four points each, but the Lankans could not make it to the semifinals on net run rates.

Nepal is likely to field the same playing XI that defeated Malaysia in its last match, but if any changes are to be made, Pawan Sarraf, who took two wickets against India and has delivered when given opportunities, might come in the place of Pranit Thapa Magar.

Meanwhile, Afghanistan’s Darwish Rasool who hit 105 runs off 38 balls, may cement his place in the starting lineup along with bowlers Mujeeb, captain Naveen-ul-Haq, Wafadar, and Tariq Stanikzai who took two wickets each against UAE.

“It will be a very important match against Afghanistan. They have been a very good side in recent times and have beaten us two times in the last two matches. But, this time it is going to be different. We have been stronger in all three forms since then. We look forward to having a tough match,” said Das.

“We have plans and will look to apply it as we have been doing. The attitude will be the same. Individually, all the players know their roles and they will come out good. There is no pressure ahead of the match. Everyone will open up and play their games,” he added.

Bodies float down Ganges as nearly 4,000 more die of COVID in India
50 minutes ago

32,000 vials of Remdesivir arrive in Nepal
53 minutes ago