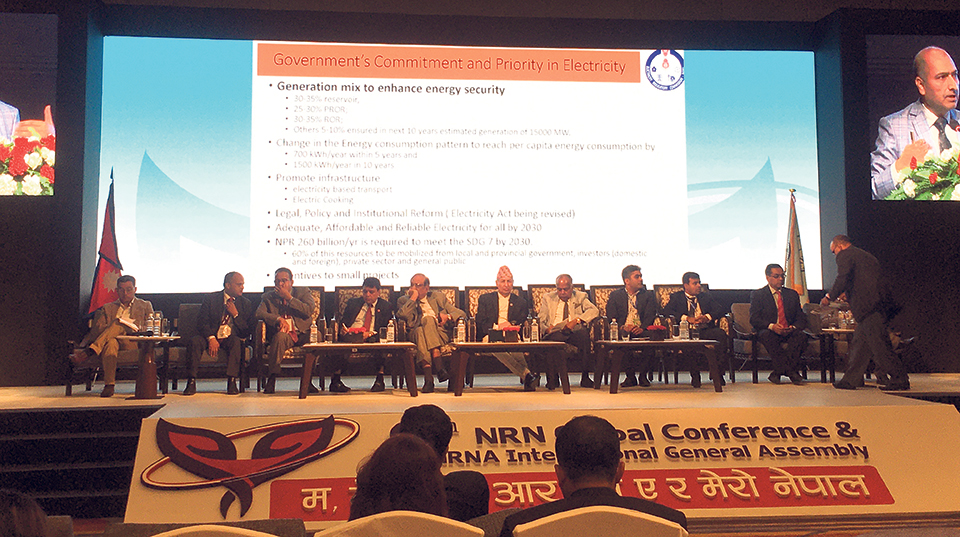 Khatiwada, speaking at the 9th global conference of Non-Resident Nepali Association (NRNA) on Tuesday in Kathmandu, said Nepal had resolved the issues that come with federalism.

“We faced issues regarding the authority of tax collection in the first year which has already been solved,” he said, “Now, the only issue regarding the distribution of royalty from natural resources among different tiers of government is left. We are working to get it sorted, and a separate law is being prepared for the distribution of natural resources.” With this into effect, Khatiwada said that misunderstandings will be cleared and tax collection will be systematic.

“Investors know that if they make an investment in Nepal they will get good returns,” he added. “The only thing is that we need to make improvements at the policy level. We have started one-stop service that needs to be effectively implemented. We need to provide industrial security and to ensure that we are planning to collaborate with Nepal Police and Nepal Army for security.”

He also stated that laws were being amended to ensure physical and financial security as well as good return of investment.

Addressing the event, former finance minister Ram Sharan Mahat said there were some constraints in the foreign direct investment laws that need to be fixed. “Nepal lags behind in manufacturing sector,” he said, “Intergovernmental coordination is must and investments can come in high-value agricultural crops other than other sectors.”

Khatiwada listed transportation, infrastructure, education, health, and service sectors as probable areas where they could make investment. “The model of development needs to be processed. Resources, technology, and labor cannot individually bring economic transformation of Nepal. They should work together,” he further added. The conference was inaugurated by President Bidya Devi Bhandari and will be concluded by Prime Minister Khadga Prasad Oli on Thursday.

The three-day conference is jointly organized by the government, the Federation of Nepalese Chambers of Commerce and Industries (FNCCI), and the NRNA.

According to the NRNA, a total of 2,500 participants including NRN representatives from 81 countries are attending the conference. The conference will see participation of the representatives of the government, political parties, entrepreneurs, civil society and social workers.

There will be altogether seven sessions in the event and discussions on different topics dealing with NRNs with the theme ‘I, My NRNA and My Nepal’. The conference will feature sessions like mobilization of resources for economic transformation of Nepal, legal rights and responsibility of NRNs, safe and respectable migration challenges at the time of economic downturn, Nepal promotion: role of NRNs (Visit Nepal 2020) and the NRNA in philanthropy and charity.

Elections to various NRNA posts are taking place on Wednesday, leading to the formation of an International Coordination Council.

KATHMANDU, March 5: A day after he tendered his resignation as minister of finance as well as communications and information... Read More...

Banks’ profits continue to surge despite shortage of lendable funds

KATHMANDU, May 11: Commercial banks have posted an impressive profit growth in the third quarter of the current fiscal year... Read More...

KATHMANDU, Nov 17: Minister for Finance Yuba Raj Khatiwada has said that the government has been making every effort to... Read More...