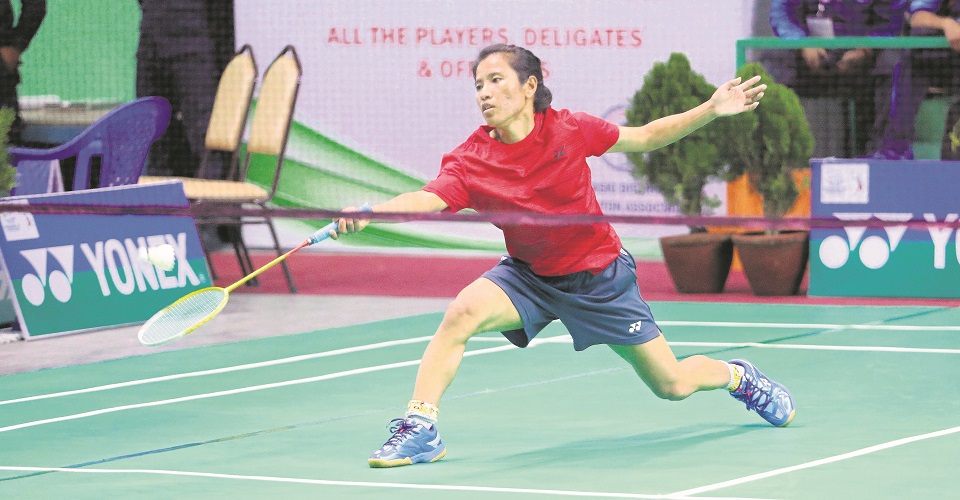 Nepal's Nangsal Devi Tamang in action during the women's badminton team event of the 13th South Asian Games at the Pokhara Stadium's covered hall in Pokhara on Sunday. Umesh Pun/Republica

POKHARA, Dec 2: Nepal opened the badminton team event with wins to reach the semifinals at the 13th South Asian Games in Pokhara on Sunday.

At the covered hall of the Pokhara Stadium, Nepali men’s team beat the Bhutanese side, while the women’s team overcame Bangladesh to advance into the last four.

Both Nepali men’s and women’s team will face Sri Lankan teams in the semifinals on Monday. The finals are also scheduled later on the same day.

Altogether 94 players from seven SAARC member countries are competing for seven golds, seven silvers and 17 bronzes in badminton events. The singles, doubles, and mixed doubles events will begin from Tuesday.

This is the first time Pokhara is hosting any event of the SAG. The city is also hosting women’s football and cricket, archery, handball, triathlon, beach volleyball and weightlifting.

The official inauguration ceremony of the Games in Pokhara will take place on Monday. Gandaki Province Chief Minister Prithivi Subba Gurung will inaugurate the Games amid a special ceremony at the Pokhara Stadium, which will be participated by the players and athletes from all seven provinces.

The preparation for the grand inauguration ceremony is over with the football ground almost ready after the completion of the works of parapet installation and track marking.

After the inauguration, the finals of the badminton team will be held. The women’s cricket is also scheduled for today while women’s football will begin from Tuesday.

Meanwhile, the metropolitan city has been cleaned and decorated to welcome the visiting athletes.

Nepal primed for bronze in men's singles and mixed doubles

POKHARA, Dec 5: Nepal has secured at least a bronze in the men's singles, doubles and mix doubles in the 13th... Read More...