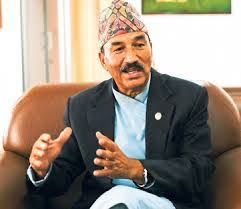 Talking to media persons today at Tribhuvan International Airport upon his arrival from attending the first convocation ceremony of South Asian University held in New Delhi on June 11, the Deputy Prime Minister said, " The bilateral relations between the two countries are getting consolidated and they have not been impeded as talked and guessed."

Misunderstandings seen in the Nepal-India relations had been cleared off with the latest Prime Minister KP Sharma Oli's visit there, he said, adding that the exchange of bilateral visits was taking place. India just wished that all Nepali citizens could find their existence and ownership in the new constitution and Nepal would have peace, stability and strengthened democracy, he said.

According to Foreign Affairs Minister Thapa, his meeting with his Indian counterpart focused on reviewing the current state of Nepal-India bilateral relations. The meeting also emphasized on the importance of regular exchange of views at different levels in order to further strengthen the bilateral relations. They agreed to have a Joint Commission meeting at a mutually convenient date in order to review the overall progress in Nepal-India relations including the progress in various joint undertakings.

Preparations were underway to hold 13 bilateral meetings between Nepal and India within coming July and the Joint Commission Meeting on coming October, as shared by Minister Thapa on the occasion.

Foreign Minister Thapa said an agreement had been made between the two sides to arrange for bilateral visits by the Presidents of both countries in an appropriate time, bearing in mind the importance of such high level visits in consolidating the bilateral ties.

During his stay in the Indian capital, Minister Nepal had a meeting with Indian Congress I senior leader and former Prime Minister Manmohan Singh. On the occasion, the two exchanged views on the current state of the relations between the two countries. In his address to the University convocation ceremony, Minister Thapa reiterated Nepal's commitments to the SAARC and to its ideologies and goals.

In a response to journalists' query, he called on political parties to realize that any misunderstanding among them could hamper the constitution enforcement efforts. RSS

Nepal's relations with China not at India's cost: DPM Thapa

KATHMANDU, June 11: Nepal's relations with India is "incomparable" and its growing ties with China was not at the cost of... Read More...

PHOTOS: A school in Kageshwori Manohara Municipality resumes classes after seven months of shut down
20 hours ago