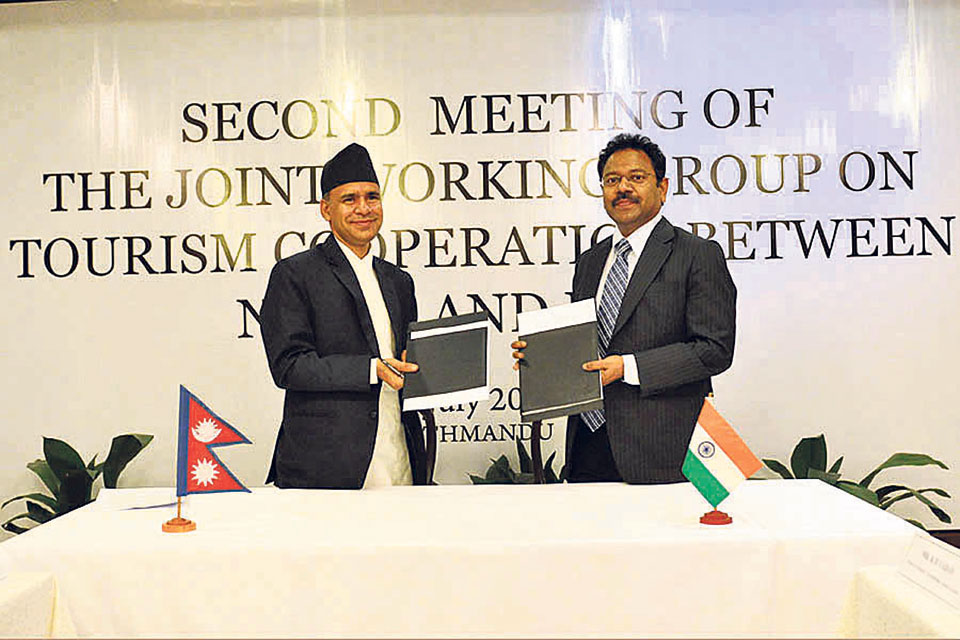 KATHMANDU, July 7: Nepal and India have agreed to form Nepal-India Tourism Forum for effective marketing and promotion of tourism products and services in two countries.

The second meeting of the Joint Working Group on Tourism Cooperation between Nepal and India held in Kathmandu on Friday took the decision.

“To work cooperatively on possibilities and promotion of bilateral tourism activities, the meeting has decided to form a tourism forum,” Ghanashyam Upadhyaya, the spokesperson for the Ministry of Culture, Tourism and Civil Aviation (MoCTCA), who led Nepal in the meeting, said.

The two sides have signed a 14-point agreement after the meeting, according to the tourism ministry. Both the countries have agreed to work together on development and promotion of Leave Travel Concession (LTC), Overland Travel Facilitation, Improvement in Road Infrastructure, Air Connectivity to Lumbini, formation of Nepal-India Tourism Forum, Human Resources Development in Tourism Sector, and Listing of Medical Facilities for Tourists, according to a statement issued by the tourism ministry.

Similarly, the agreement also mentions that both the countries will sort out infrastructural obstructions for tourists visiting via land route. It has also been agreed to improve road connectivity and bridges, and further streamline scheduled bus route operations including luxury bus coaches.

Similarly, both the sides have agreed to establish Mithila Museum in Janakpur of Nepal.

Meanwhile, a statement issued by the Embassy of India in Kathmandu says:  “The Indian side has agreed to extend all possible cooperation in the domain of human resource development in tourism and hospitality sectors through intake of Nepali professionals in professional courses in Indian universities, regular exchange of experts and academia.”

During the meeting, the Indian delegation has agreed to do needful works to give permission to Nepali motor vehicles to travel India as Nepal has provided special permission to Indian vehicles to enter Nepal, according to the tourism ministry statement.

“Toward adventurous and mountaineering tourism, a positive discussion was held to provide mountaineering certificate to Nepali mountaineers climbing Indian mountains. Likewise, India has responded positively to Nepal’s request for technical assistant for development of ski in Nepal.”

The 11-member Indian delegation was led by the Ministry of Tourism’s Joint Secretary Suman Billa.

The working group was first mooted during the visit of Indian Prime Minister Narendra Modi to Nepal in 2014 through a Memorandum of Understanding on tourism between the two countries. The first meeting was held on February 19, 2015 in New Delhi, India.

DARCHULA, Jan 31: The security authorities of Nepal and India have agreed to prevent cross-border crime and crimes that take... Read More...

Explainer: Why Pakistan's army chief matters far beyond its borders
23 hours ago