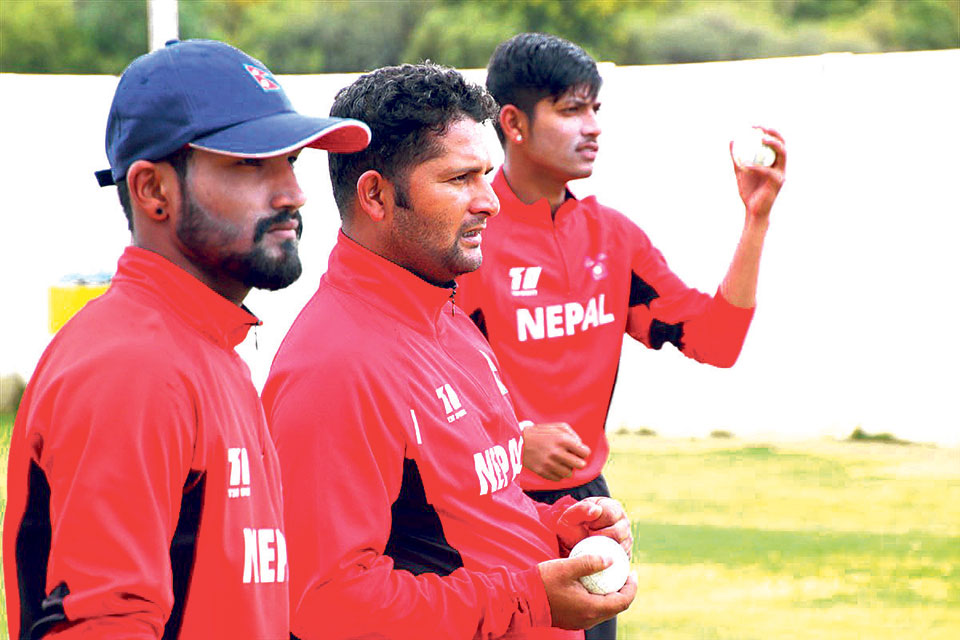 KATHMANDU, Feb 8: Nepal embarked on international cricket journey in 2010, highlighted by a world event appearance in 2013 as the pinnacle of the team, until 2015. Nepali cricket team’s hard work, perseverance and a bit of luck helped the squad ascend from Division Five to Division Two and landed them in the ICC World Cricket League Championship (WCLC).

It helped Nepal rub shoulders with the best eight cricket teams outside the Test world (excluding Afghanistan and Ireland) with a chance to secure World Cup qualifiers spot. Nepal was outplayed in half of the WCLC matches but big wins against Namibia and Netherlands gave a moment of pride as well as grace finishing seventh only above Namibia in the points table in a two-year-long event.

At the same time Nepali cricket was marred by one problem after another as the country was devastated by major earthquake in 2015 and later dissolution of Cricket Association of Nepal (CAN) further complicated the situation. Nepali cricket however survived and got an opportunity to participate in another competition and got one more chance to make it to the World Cup.
Dropped from the WCLC to Division Two again, Nepal will have another shot to feature in the ICC World Cup 2019, albeit one last time for current four-year circle.

Schedule
Altogether six teams will participate in the Division Two league from Thursday. Nepal will join the United Arab Emirates (UAE), Namibia, Kenya, the fellow bottom four demoted teams from the WCLC along with other two teams -- Oman and Canada -- that were promoted from Division Three held in May last year.

The top two teams will qualify and will be just one-but-treacherous-step away from the World Cup in England and Wales in 2019.

The 18-match tournament will take place across three venues in Windhoek; Wanderers, Affies and United Ground.  The top two teams will advance to the ICC World Cup Qualifiers to be held from March 4 to 25 in Zimbabwe.

Conditions
Assuming Namibian conditions like South Africa is a common intuition. However, scoring runs or taking wickets requires certain level of basic application, be it any surface in the world. Basant Regmi has enjoyed relative success in almost all kinds of pitches and skipper Paras Khadka’s performance has remained consistent irrespective of the nations he played in so far. Rest of the players will need to take inspirations from the two senior-most players in the squad.

The conditions do matter if the respective records of Sharad Vesawkar and Karan KC in Namibian pitches are to be observed. Karan bowled surprisingly well in 2015 visit, whereas Vesawkar’s records suggest he has been struggling to put consistent scores outside Asia.

In the meantime, there is high chance rain can play a spoilsport. Namibia’s calendar shows the month of February has seen most rains in the African country. “It can swing early in the mornings, and turn later at Wanderers. United Ground is on low and slower side and sometimes two-paced which can make it difficult for batsmen. Wanderers and Affies are fast with later considered as the best batting track,” said Bertus de Jong, the avid follower of Associate Cricket and a columnist at Cricbuzz, who was in Namibia for the Division Two tournament in 2015.

Nepal will play first two matches in Affies Park, the last two in Wanderers and the remaining one against the UAE in United Ground.

Squad
Longtime out-of-form batsmen Binod Bhandari and Sagar Pun have been replaced by youngsters Anil Kumar Sah and newcomer Rohit Kumar Paudel. Both might have to wait for their debut as all-rounder Aarif Sheikh and wicket-keeper Dilip Nath are likely to be preferred for their respective dual important roles in the XI.

Nepal retained the veteran spin duo of Basant Regmi and Shakti Gauchan. But the leg-spin sensation Sandeep Lamichhane, 17, will be the one to watch with the new-found energy on the back of bagging an IPL contract from Delhi Daredevils earlier this month. The bowling combination will see one of the three spinners to be dropped if there is a need to fit in all three in-form pacers in Karan KC, Sompal Kami and Lalit Bhandari.

The batting will once again depend on the three mainstays of Nepal, Khadka, Gyanendra Malla and Vesawkar along with the exciting all-rounder Dipendra Singh Airee to provide much-needed fireworks in the middle.

Analysis
Given the consistent performance by Nepali bowlers even in crucial situation in the past, bowlers will once again need to deliver to ensure chances of qualifying. The aging veteran duo, especially Regmi, will lead the bowling attack. Sompal recently picked up a five-wicket-haul in the last game of the WCLC. KC was also in good rhythm against Hong Kong before missing two matches against the UAE. Sompal (11) and KC (9) were the highest wicket takers for Nepal in the last Namibia tour. Bhandari is still fresh but has been impressive with his natural swing which should get assistance from the helpful conditions of Wanderers.

Khadka has been bowling seam ups in preparations for Namibia. He also picked up a five-wicket-haul in the UAE. Sheikh can bowl effective cutters and slower balls in death overs but Nepal has so far not used him much.

The domestic T20 events have helped Nepali newcomers bat aggressively, but playing one-day game will be a different challenge in the Namibian conditions. Rohit will be required to fit in the role of Bhandari, whereas youth batsman Sah remains one of the most rapidly evolving cricketers in Nepal after delivering his team Biratnagar Warriors win the Everest Premier League (EPL) final with the ball in December.

Nepal’s fate will largely depend on Dilip Nath’s opening. The left-handed batsman scored a fifty in preparation tour at the UAE. He will be keeping wickets too.

Prediction
Most of the Nepal matches were low scoring in the 2015 edition. Nepal will play five matches in eight days from Thursday and its results will depend on the momentum it secures at the start of the tournament. Last time, Nepal defeated comparatively stronger teams Namibia and the Netherlands but lost to Kenya and Uganda missing on a chance to finish as high as possible.

The new team Oman, promoted from Division Three playing some rejuvenated cricket, may pose challenge and is in-form team in the tournament. Namibia, Kenya, Canada and the UAE are familiar opponents for Nepal. Any team can come on the top on their day.

There is no any heavy pre-tournament favorite, but Namibia will have an upper hand for playing at home and Oman has remained in winning momentum on their side. Nepal’s strong bowling makes their case as well, whereas the UAE has prepared hard playing competitive cricket hosting tri-series against Ireland and Scotland.

These teams are better-placed as prime contenders for the qualification followed by Kenya and Canada likely struggle to avoid relegation.

KATHMANDU, Feb 15: In a miraculous effort by Karan KC who smashed 42 runs from 31 deliveries including three boundaries... Read More...

KATHMANDU, Dec 22: Despite threats from the United States to withhold "billions" of dollars in US aid for countries which would... Read More...