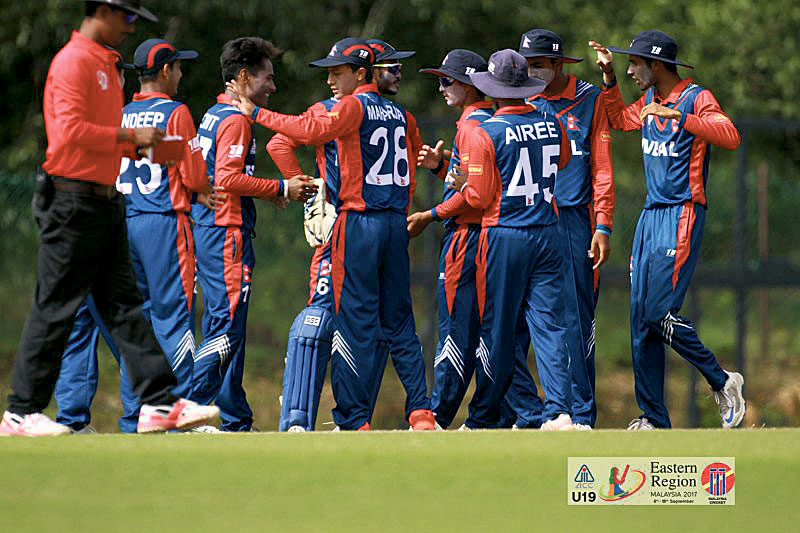 Nepal U-19 cricket team players celebrate after winning the ACC U-19 Eastern Region Cricket Tournament’s semifinal against Malaysia in Kuala Lumpur on Saturday.

KUALA LUMPUR, Sept 17: Nepal is set to take on Hong Kong in the summit clash of the ongoing ACC U-19 Eastern Region Cricket Tournament on Sunday.

Nepal needs to win the competition to secure its berth in the ACC U-19 Asia Cup which also will be held in Malaysia in November.

Asia Cup will feature five Asian Test playing nations including India, Pakistan, Sri Lanka, Bangladesh and Afghanistan and the champions of the Eastern Region and Western Region of ACC U-19.

Dipendra Singh Airee was the architect in Nepal’s comprehensive win over Malaysia as the skipper picked five wickets to restrict the host team for a low total of 121/10 in 42 overs.
In reply, Nepal hit 125 runs in just 23.1 overs without losing any wicket.

Opener Nalin De Silva was highest scorer for the Malaysian team as he struck 39 runs off 93 balls that included four boundaries and two sixes before getting dismissed in Shahab Alam’s delivery.
Likewise, Pawan Sarraf claimed two wickets while Sandeep Lamichhane and Rohit Kumar Paudel pocketed one wicket each.

Former skipper of Nepali age-group Lamichhane is now highest wicket taker in the tournament with 13 wickets while current skipper Airee and Sarraf are in the second and third places in the list with 12 and eight wickets respectively.

Meanwhile skipper Airee said the team played as per the plan. “We wanted to bowl out them as early as possible. We also didn’t lose any wicket. So our overall performance was very good,” said Airee.

He said that the in-form batting line-up has motivated the entire team. “Batsmen have been making enough runs and that has further emboldened players’ confidence and it’s a good sign ahead of our final match,” concluded Airee.

KATHMANDU, Sept 27: Hotel Yak and Yeti is organizing the Yak & Yeti Tennis Tournament for the first time from... Read More...

Weather Alert: Chance of light rain across Nepal
9 minutes ago

Two arrested with 147 grams of brown sugar
27 minutes ago