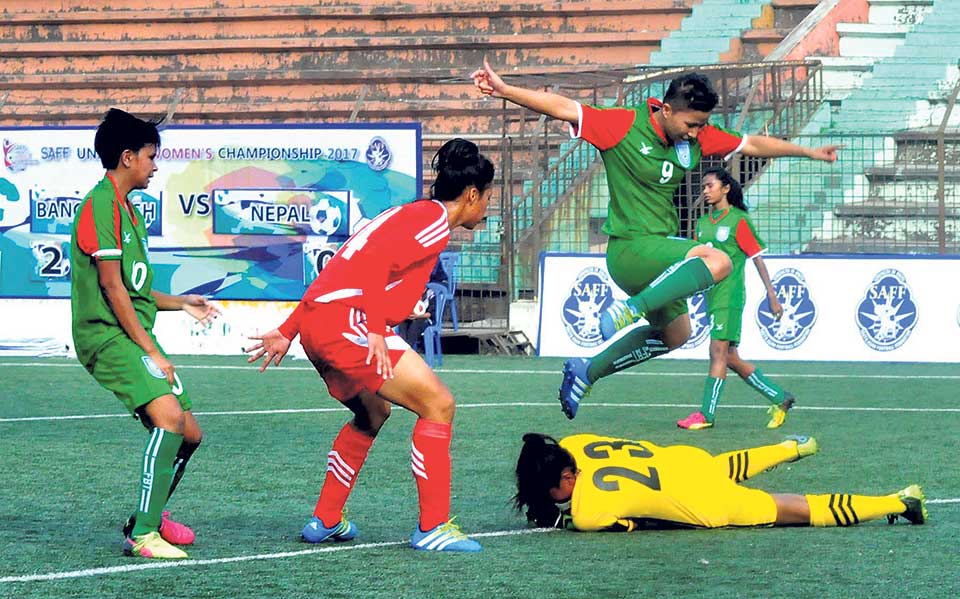 Players of Nepal and Bangladesh (green) in action during a match of the SAFF U-15 Women’s Championship at the Birshreshtha Shaheed Mostafa Kamal Stadium in Dhaka, Bangladesh on Sunday. Photo Courtesy: NSJF

KATHMANDU, Dec 18: Nepal began the SAFF U-15 Women’s Championship with a 6-0 defeat to host Bangladesh on Sunday.

In the one-sided match at Bir Shreshtha Shaheed Mostafa Kamal Stadium in Kamalapur, Dhaka, Tohura Khatun scored a hat-trick while Anuching Mogini struck two goals for the Bangladeshi side. Likewise, Monica Chakma added another goal for the winning team.

Bangladesh took a lead with Chakma’s opener in the 11th minute and Mogini doubled the tally two minutes later. Similarly, Khatun made 3-0 for Bangladesh in the 32nd minute and Mogini scored her personal second in the last minute of first half to make the score line 4-0.

In the second half, Bangladesh added two more goals with Khatun finding the net in the 69th and 72nd minutes to complete her hat-trick.

After facing a big margin defeat to home team, Nepali head coach Ganga Gurung said that her players could not defend well. Gurung also said that she will field the team with new strategy in the second match against India scheduled on Tuesday.

Meanwhile in the tournament’s opening match held earlier in the day, India recorded 3-0 win over Bhutan.

Kritina Devi, Priyanga Devi and Pratiksha Lakra netted one goal each for the Indian team.

KATHMANDU, April 18: Nepal is placed in Group 'A' of the 2018 SAFF Championship to be held in Bangladesh in coming... Read More...

No one can become PM by making noise: Dr Koirala
5 minutes ago