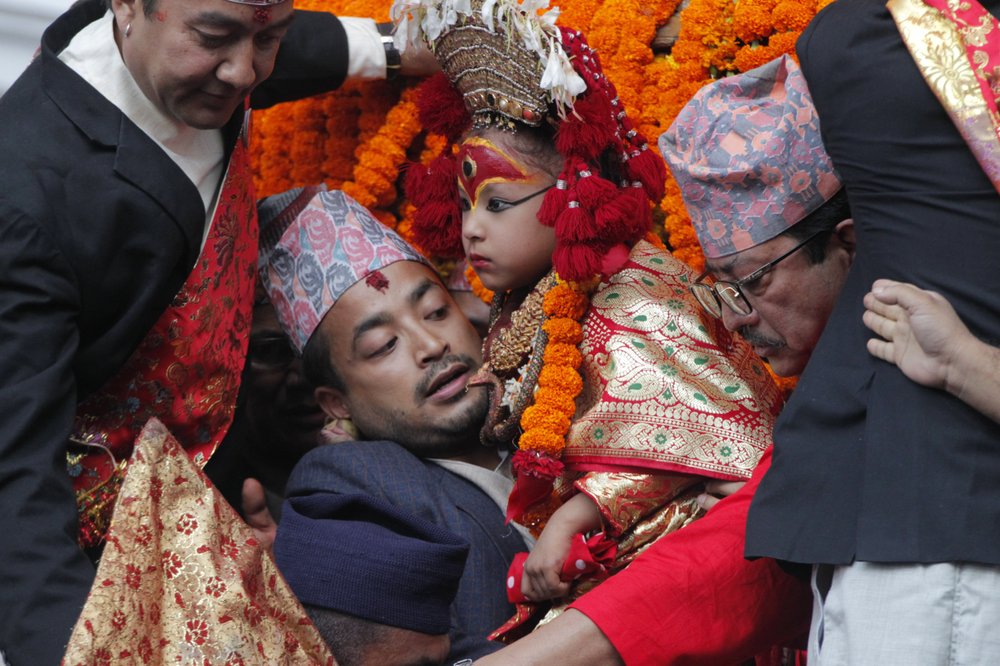 A devotee carries a revered living goddess Kumari, center, to a chariot during Indra Jatra festival, an eight-day festival that honors Indra, the Hindu god of rain, in Kathmandu, Nepal, Friday, Sept. 13, 2019. The living goddess was pulled around the main parts of the capital Friday by devotees on a wooden chariot as tens of thousands of people lined up the old city to get a glimpse and blessing. (AP Photo/Niranjan Shrestha)

KATHMANDU, Sept 14: Devotees pulled a girl believed to be a living goddess, Kumari, around Nepal’s capital on a wooden chariot as tens of thousands of people lined the streets to get a glimpse and receive a blessing.

President Bidhya Devi Bhandari and other top officials were among those seeking a blessing Friday from the girl, one in a long series who have been worshipped as a living goddess.

Indra Jatra begins a festival season that runs until October, during which both Hindus and Buddhists celebrate with family, feasts, and merry-making.

Families gathered Friday for feasts and at shrines to light incense for the dead, and men and boys in colorful masks and gowns representing Hindu deities danced to traditional music and drums, drawing throngs of spectators to the city’s old streets.

The masked dancers, one of the highlights of the ceremony, can be fearsome, entertaining and awe-inspiring, depending on the performers’ movements.