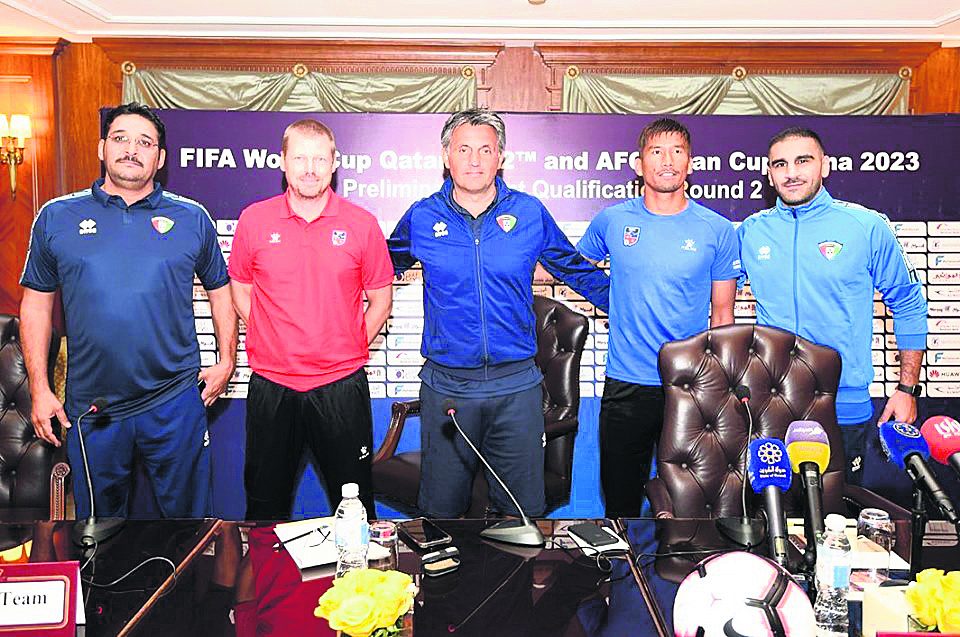 KATHMANDU, Sept 5: With an away trip against Kuwait on Thursday, Nepal national football team will start its second round of the 2022 FIFA World Cup Qualifiers (AFC).

Despite being previously scheduled to be played in Nepal, the match was later announced to be played in Kuwait because of the lack of physical infrastructure in the country. Kuwait is 10 ranks ahead of Nepal in the FIFA rankings.

This is the eighth time Nepal will be playing in the World Cup qualifying match with the mega event set to reach the 22nd edition when Qatar hosts the tournament in November of 2022.

Nepal will be targeting to kickstart its second round of the campaign on a winning note with a balanced performance against the home team Kuwait at the Jaber Al-Ahmad International Stadium.
Striker Nawayug Shrestha is unlikely to play against Kuwait because of a fever and is under medication, said Nepali officials.

Nepal will want to get a positive result against Kuwait in Group B with the tournament being seen as the qualifications for both the 2022 World Cup and 2023 Asian Cup. The other teams Nepal will be facing in Group B are Chinese Taipei, Jordan and Asian heavyweight Australia.

Nepal has not been able to bring a positive result against Kuwait in the previous matches it has played against the team. When Nepal lost 3-1 to Kuwait at the 1982 Asian Games, the team created history. Despite the loss, Yam Bahadur Ghale became the first Nepali player to score an international goal. After that, Nepal has not been able to score a goal against Kuwait so far.

Nepal played two matches against Kuwait in the last March in which it lost one and drew one under the Swedish head coach Johan Kalin. The first friendly match on March 21 saw Nepal play a 0-0 draw against Kuwait, while it lost 1-0 against the same team four days later.

Playing a total of six games against the team, Nepal has not been able to nick a victory yet and has drawn only once losing all others. With Ghale scoring the only goal against Kuwait, Nepal has not even scored more than one goal but has conceded a staggering number of 22 goals.

Likewise, Nepal has played a total of 30 games in the World Cup Qualifying matches so far, but has won only four so far. It also has played four draws conceding a total of 100 goals and scoring 22.

The only teams it beat in the qualifying matches are Macau (2) and Timor Leste (2). The only time the team managed to reach the second round, except this time, was in 2014 when it defeated Timor Leste 7-1 in aggregate in the first round.

Nepal also lost 9-0 to Jordan and then played a surprising 1-1 draw in Nepal with a goal from Bharat Khawas in the second leg for the 2014 edition.

The game on Thursday has not just been seen as the fight between Nepal and Kuwait, but also the fight between two European coaches. While Kalin is the head coach of the Nepali team since January 17 this year, Croatia’s Romeo Jozak took over the Kuwaiti team on July 27, 2018.

Nepal will be looking for a good start away from home against Kuwait and start the tournament on a winning note, but defeating a team like Kuwait in its own backyard will be very difficult. The real test for Kalin will be in the game as the coach has not been able to win a single game for Nepal so farwith drawing twice and losing twice.

Kuwait has a good history in the international tournaments as it lifted to Asian Cup in 1980 and played its first World Cup in 1982 in Spain.
After the match against Kuwait, Nepal will travel to Taiwan to play against Chinese Taipei on September 10.

World Cup Qatar 2022 Qualifiers: Nepal to play against tough opponents in second round

KUALALUMPUR, July 17: the draws for the second round of Asian qualifiers for the FIFA World Cup, 2022 was held... Read More...