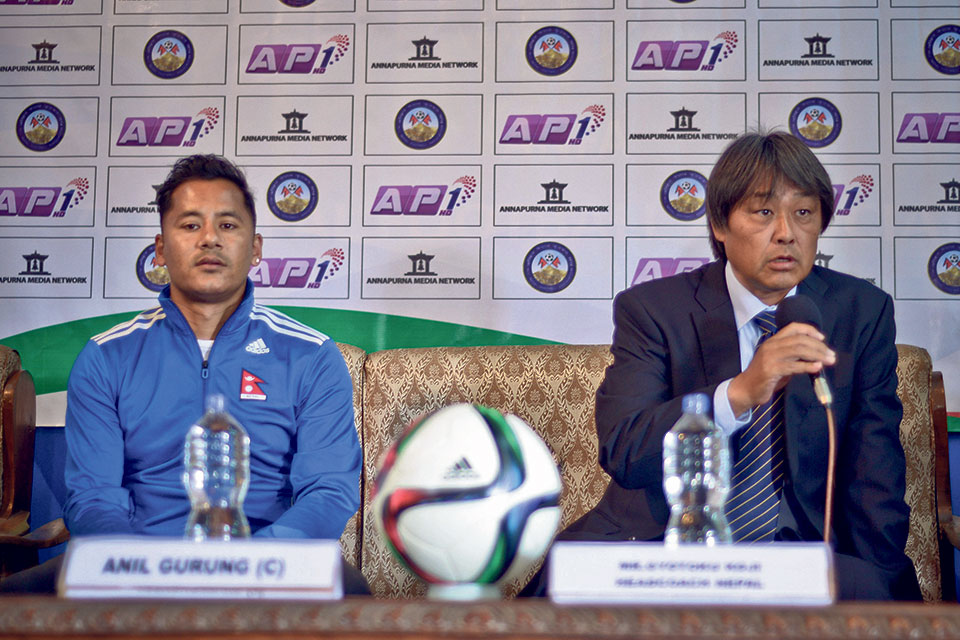 Koji changed the formation to 3-5-2 from his favorable 4-4-2 during Nepal’s away match against Tajikistan last month.

However, the new strategy didn’t work as Nepal leaked three goals against the home team at Hisor Central Stadium. Nepal had already conceded six goals in its first three matches.

Now the Japanese coach has decided to return to the old 4-4-2 formation in the encounter against the Philippines scheduled for Tuesday at ANFA Complex in Lalitpur.

Speaking at a pre-match conference at ANFA House in Lalitpur, Koji informed that the injuries to his key defenders – Aditya Chaudhary and Devendra Tamang – has forced him to use the system he was using until the clash against Tajikistan.

“Aditya and Devendra are very good in one-versus-one situation, that’s why they were my two central halves out of three at back during the Tajikistan match. But now they are not available so I can’t continue that playing system,” Koji said.

Due to the injuries to his two first-choice defenders, Koji has kept midfielders Rohit Chand and Rajendra Rawal in the defenders’ list in his 23-member final squad that he announced on Monday. Although Chand is known for playing in both defense and midfield positions, his primary position in club football in Indonesian league is more of an offensive one.

Along with Chand and Rawal, Koji has put Biraj Maharjan, Ananta Tamang, Kamal Shrestha, Jitendra Karki, and Dinesh Rajbanshi in the defensive department.

Koji has made one change in goalkeeping as Bishal Shrestha has made comeback into the squad while Kiran Kumar Limbu and Bikesh Kuthu are two other goalies to earn the berths.

Midfielder Jagajeet Shrestha has been included in the national team after almost two years. Sujal Shrestha, Bishal Rai, Bikram Lama, Anjan Bista, Heman Gurung, Hemant Thapa Magar, and Sunil Bal are the other midfielders to cement their place in the final squad.

Skipper Anil Gurung who has decided to take retirement after the Philippines match has regained his place in the team, and he will be supported by other strikers including the Army trio of Bharat Khawash, Nawayug Shrestha, and George Prince Karki. Likewise, Bimal Gharti Magar is another forward in the team.

Head coach Koji said that his team’s main focus during the one-month-long preparation was defense. “In the last match, defense was our main issue so we have worked for improvement on it,” added Koji.

He was also concerned about his attacking front adding that his forwards needed to display more physical game.

Nepal is in the bottom of Group F in the qualifiers with just one point from four matches and its qualification dream has already collapsed. Nepal had begun its qualifying campaign with 4-1 defeat to the Philippines in Manila in March. In the second match, Nepal held 0-0 to Yemen in Kathmandu but faced two straight losses to Tajikistan in home and away matches.

However, the Philippines head coach Thomas Dooley admitted that he was not taking Nepal lightly despite an impressive first-leg win. “The past result means nothing, this match is big for us and we have to work hard to acquire full three points,” said Dooley, former national team skipper of the United States.

The Philippines is almost likely to be qualified for the Asian Cup to be held in United Arab Emirates (UAE) two years later. Azkals have eight points from four matches and win against Nepal will send it to the final round as the group topper.

“Win against the home team will help us seal a place in the Asian Cup for the first time in the country’s history. However, we have to overcome Nepal which has great set of players who are very fast, skillful and energetic,” added Dooley.

Yemen and Tajikistan have six points each and occupy second and third places in the group on head-to-head basis. Since the group runner-up also secures its berth in the Asian Cup, they both will be competing with a target of win on Wednesday at Hisor Central Stadium. Both nations need to gather three points in order to strengthen their bids for the second place in the group.

BHIMDUTTANAGAR, March 22: Nepal Police has retrieved a Chinese pistol and its magazine that got lost during a clash occurred... Read More...

Efforts being made to bring the RSP back in govt: Minister Sharma
2 hours ago