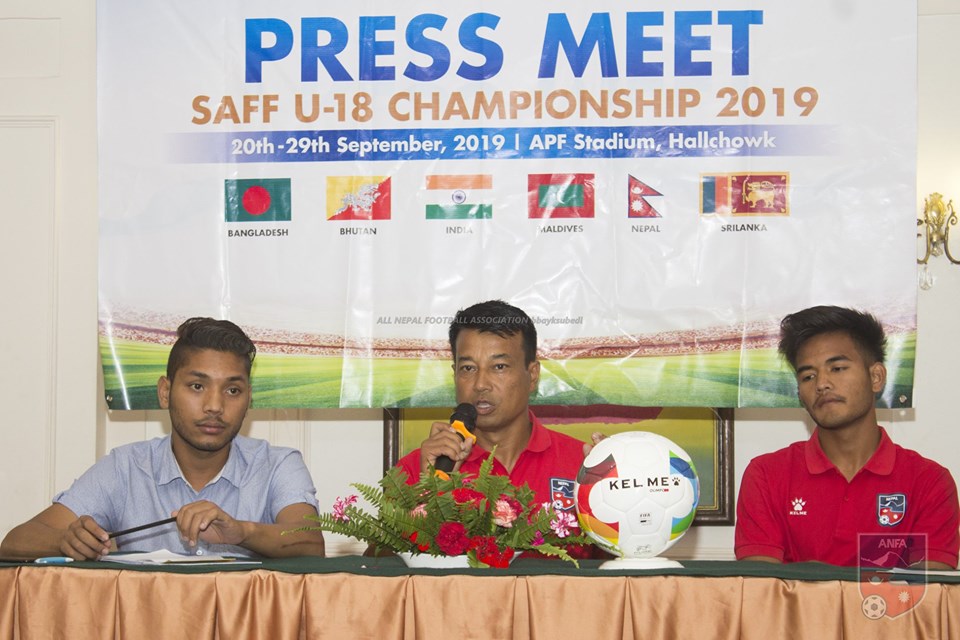 KATHMANDU, Sept 19: Head-coach of Nepali National U-18 Football Team Chet Narayan Shrestha has said that Nepal would make a hat-trick in the upcoming SAFF U-18 Championship.

On the eve of SAFF U-18 Championship, which is set to begin on September 20 at Halchowk Stadium in Kathmandu, coach Shrestha, speaking at a pre-match conference claimed that Nepali team have made sound preparations. “It is not true that other teams are weak, however, I am confident that Nepal is all set to clinch the title in this edition too,” he added.

According to Shrestha, the defending champions are at good rhythm after a 45-day-long preparation. He also viewed that the tournament at home would be an added advantage for the team.

Talking about the strategy, the coach stated that Nepal would play attacking games.

A total of six teams from South Asia are participating in the tournament. Bhutan and the Maldives have been pitted into Group ‘A’ along with host Nepal while Group ‘B’ features Bangladesh, India and Sri Lanka.

Nepal will play the tournament opener against the Maldives. Similarly, Bhutan will challenge Nepal in another group-stage match on September 22.

The two group-toppers will advance to the semi-finals. The final will be played on September 29.

Nepal had won both of the editions of the tournament played in Nepal and Bhutan respectively.

KATHMANDU, Sept 20: Defending champion Nepal has failed to register a win in its first match in SAFF U-18 Championship... Read More...