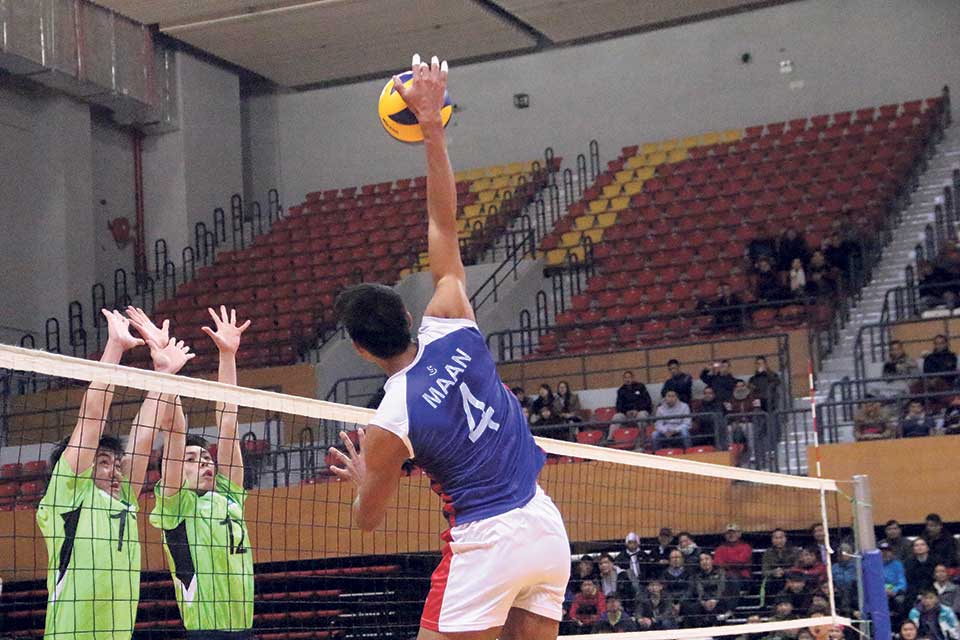 Players of Nepal (blue) and Macau in action during a friendly volleyball match at the Macau University Sports Center in Macau on Wednesday. Photo: Sujan Shrestha/Republica

MACAU, Feb 1: Nepal’s national volleyball team has registered a comfortable 3-0 set victory over Macau in a friendly match on Wednesday.

Macau, who easily gave away the first set to Nepal, showed some fighting spirit in the second and the third sets, but failed to prove their potential in front of the Nepali national players.

Nepali national team skipper Em Rana Magar said he was happy for the tour success. He said, “Macau national team is weaker. But sweeping both matches against Hong Kong is a great achievement of us. If we get opportunities to play more matches, our standard will certainly get a huge boost.

Macau head coach Auchi said that their loss was normal since they had formed the national team only on January this year.

“We formed the national team only on January. Therefore, we take this loss as a normal result,’’ he said,” The Nepali team performed very well. They deserved the win.’’

“This tournament was very beneficial for us as we collected experience of playing in an international level. I am very thankful to Nepal for agreeing to play against us. It has been long since a foreign team came to play in Macau,’’ he added.

Last time, Nepal had played against Hong Kong in the Asian Games held in Japan in 1983 in which the Nepali side had produced mixed results. In the first match played in Sagamihara, Nepal saw off Hong Kong 3-2, while it lost 3-1 in the second.

“This was our first ever match against Macau and we won. In overall, the tour went well. We registered three wins in a row,’’ Chaudhary said.

“After the first set, the substitute players also got opportunity to experience in an international competition,’’ he added.

“This tour will prove helpful for the preparations for the upcoming SAG and Central Zone games.’’

After returning from Macau, Nepal will start a closed-camp for a tour of Mauritius.