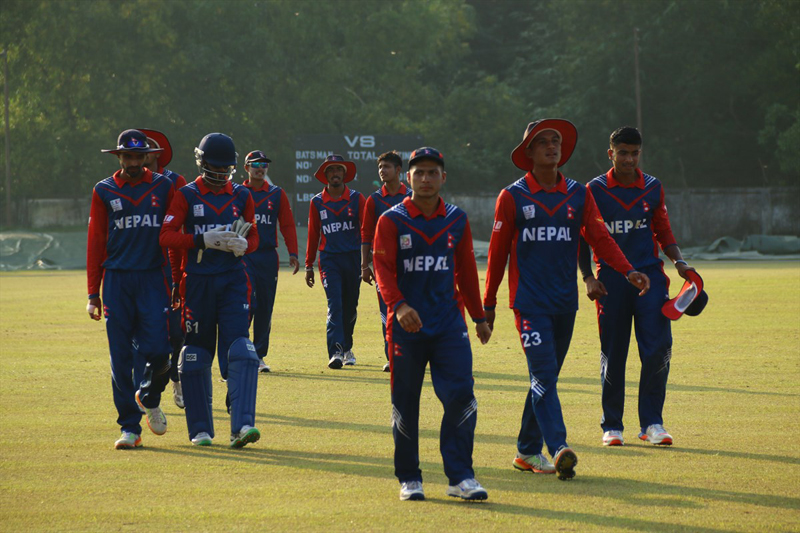 Nepal has been propelled into the euphoria of celebrations for their achievement in sports, especially cricket, since many years now. Be it winning the plate championship in 2006 or reaching the World T20 in 2014 and other similar ICC world cricket league division leaps accompanied by various ICC world qualifiers too.

This is not the first time Nepal’s junior team has defeated an established test nation. The tally starts as back as 2001/02 U19 World Cup when Nepal outsmarted Pakistan and Bangladesh in the same tourney. Pakistan which, back then, included the current test players in Salman Butt and Umar Gul and Bangladesh’s current ODI captain Mashrafe Mortaza. It doesn’t end there. The list goes on in following world cups. South Africa twice, New Zealand twice and Zimbabwe also has fallen short against Nepal. The players of those teams like Vernon Philander, Dean Elgar, Tim Southee, Martin Guptill, Kyle Jarvis, etc all went on the become sought out test players for their respective countries. Meanwhile, Nepal players like Kanishka Chaugain, Bardan Chalise, Raj Kumar Pradhan, etc had to leave Nepal and settle abroad to put food on the table. And this hasn’t stopped. Amrit Bhattarai being the most recent example. Mahesh Chhetri is likely to be the next in the line.

It has been 16 years since Nepal has been profoundly termed as giant-killers in cricket world and fans celebrating every big victory as a world-cup final at home. The same time period when the idea of Mulpani Cricket Ground was originated, planned and forwarded as a global cricket academy program by ICC. Then Nepal government happened. Even after 12 years when the first brick was laid Nepal is yet to host an official national or international match at the ground. The exhibition match between Members Secretary XI and Veterans XI of last Saturday doesn’t count. In meantime, Sandeep Lamichhane was born and grew up to become a worldwide sensation.

Reaching semi-finals of Youth Asia Cup at cost of India is and has to be game-changer for Nepal cricket. Not that Nepal is blowing their own horn, the great Rahul Dravid admitted to Nepal playing the best cricket in ongoing Asia Cup. It should be now or never for Nepal. No matter what happens in semifinal or final, Nepal’s cricket needs to be addressed by the government. Not just only Cricket Association of Nepal (CAN) or Nepal Sports Council (NSC) or Ministry of Sports but the cabinet needs to stop turning their blind eye to the glorious and economical possibilities sports can provide to this deranged country. And these are the same words that have been repeated, discussed, fueled, raged, settled and forgotten at least on a dozen occasions before.

Mulpani is yet to host an international match, Nepal’s only international ground is still owned by Tribhuvan University and Pokhara’s most productive cricket ground is set to be demolished for Government quarters.

Most teams won’t get opportunities in any other sports like cricket to defeat the absolute best team in the world be it any format or earnings. They are the number one team in international cricket as well as junior cricket. Not to mention, the best nation in the world for economic stability and revenues in and from cricket. The India’s loss has made the advisor of the Indian Ministry of Sports Amrit Mathur to compare the daily earnings of cricket players from both nations. A Nepal player, say Paras Khadka, earns NRs 35,000 per month as designated in his Grade A contract by CAN and ICC compared to Virat Kohli’s close to NRs 2.7 million (amount excluding individual match fees for each international match) per month on central contract with BCCI. If that was ambiguous, and need to tone down in realistic levels, India’s Ranji player earns twice in a day than the monthly salary of contracted Nepal cricketer. These facts and figures are not a result of the overnight lottery. 13 years ago, India’s U-19 team led by Ambati Rayudu along with players like Robin Uthappa, Dinesh Kartik, Suresh Raina and Shikhar Dhawan had toured Nepal. Imagine the same thing happening in present context, leave it. Point is, it took 13 years for BCCI to be where they are now. Same time when Nepal managed to get suspended and are on the verge of permanent dismantling.

It is not like Nepal Is not capable of establishing cricket as an economic hub. For years guys like Aamir Akhthar and Subash Shahi has been doing their best on their own to put up a financially feasible cricket structures as premier leagues and other junior and domestic cricket tournaments. Dhangadhi established themselves into “The City of Cricket” on back of their passion for cricket where peoples from a momo-vendor to top brands of country invest to make the tournament viable. Why can’t Nepal as a country and CAN as an association with all the resources and facilities do it?

Nepal has largest fan-base in Associate cricket which is secret to none. There is an exemplary culture of cricket in Nepal that even ICC has admitted by providing breathing spaces every now and then. The production of cricket players has transferred from eastern region to western part of Nepal evident by the success of Dipendra Airee and Sandeep Lamichhane. However, east is rising again with players like Anil Sah, Pawan Sarraf, and Kishore Mahato.

But the problem lies where people search for answers. For example, one of oldest surviving political party Nepali Congress has not even mentioned sports in their manifesto for upcoming House of Representative and Provincial elections. Nepal cricket deserves better. The government needs to wake up.

Search for missing trekkers to resume in March

KATHMANDU, Jan 24: The government suspended the search for the missing trekkers in the Annapurna region on Thursday citing renewed... Read More...