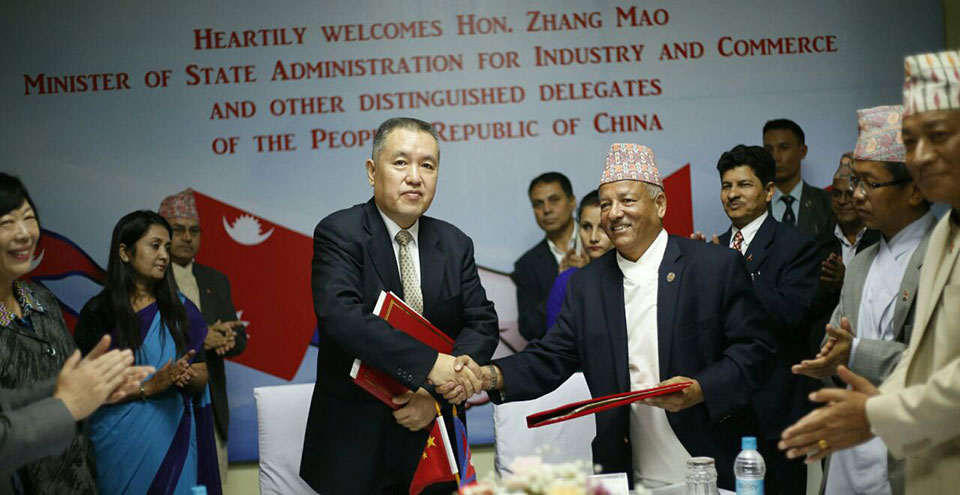 Minister for Supplies, the Government of Nepal, Deepak Bohara and Minister of State Administration for Industry and Commerce, the People’s Republic of China, Zhang Mao shaking hands after signing a MOU on the consumers’ rights protection, trade and commerce on Wednesday. (Dipesh Shrestha/Republica)

KATHMANDU, Oct 19: Nepal and China have signed a Memorandum of Understanding (MOU) on the bilateral exchange of information on the areas of consumers’ rights protection, trade and commerce relations on Wednesday.

The MOU was signed by Minister for Supplies, the Government of Nepal, Deepak Bohara and Minister of State Administration for Industry and Commerce, the People’s Republic of China, Zhang Mao.

“The MOU is intended to initiating bilateral exchange of information on the areas of consumers’ rights protection, further stepping up of the implementation of existing rules and regulations in the areas, help create competitive market environment and more particularly, accentuate the trade relations between the two countries,” The Ministry of Supplies said in a press release issued today.

The important areas of cooperation include, among others, the mutual exchange of information on newly effected rules and regulations, routinely hold consultations by officials on the matters of common concerns, information sharing on new practices of trade and commerce and periodic exchange visits by government officials, trade experts and consumer’s rights activists.

“The MOU would be a milestone in strengthening trade relations between the countries and further added that the Government of Nepal is consistently making efforts in protecting consumers ‘interests,” said Minister Deepak Bohara after signing the MOU.

Minister Zhang Mao said that the MOU would reinforce traditional trade, and commerce relations between Nepal and China, and help protect interests of consumers of both the countries.

During the program, Prem Kumar Rai, Secretary of the Ministry of Supplies, Government of Nepal, opined that the MOU would be instrumental in underpinning trade and commerce relationship between the two friendly countries. 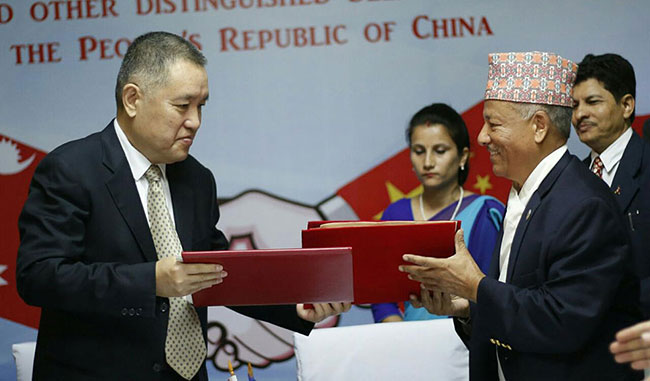 India, 'pharmacy of the world', starts COVID vaccine shipments to neighbours
21 hours ago
Two edible oil producers slapped cash fine of Rs 300,000 each for charging exorbitantly high prices for their products
7 hours ago