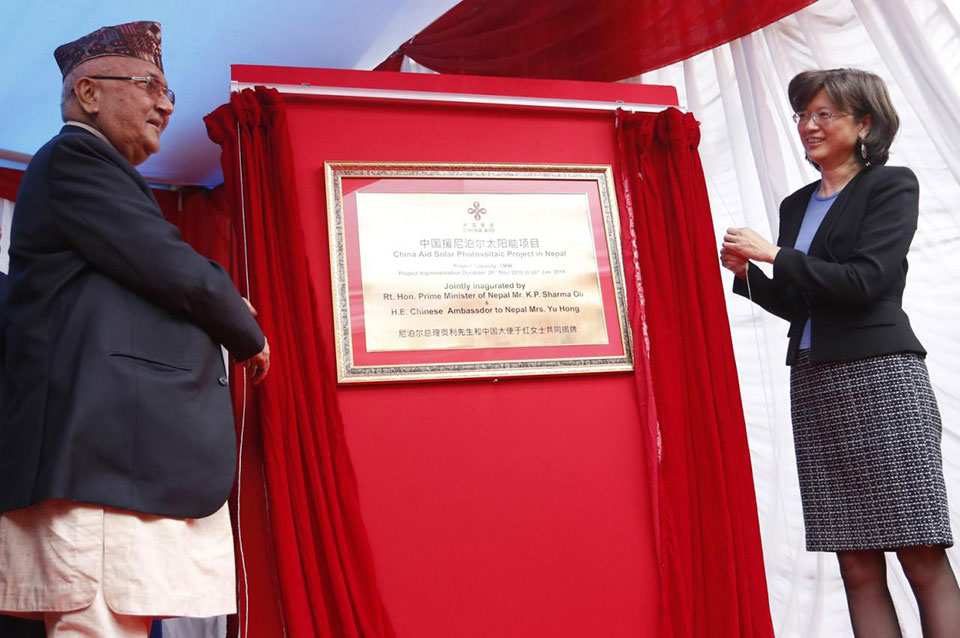 KATHMANDU, April 10: Singha Durbar, the administrative center of the federal government, has been formally powered with over 1-megawatt solar energy from Tuesday.

The grid-connected solar photovoltaic system installed with the financial and technical support of the Chinese government was jointly inaugurated by Prime Minister KP Oli and Chinese Ambassador to Nepal Yu Hong amid a function Tuesday. After the inauguration, the Chinese side handed over the solar project to the Ministry of Energy, Water Resources and Irrigation.

With the inauguration of the project, the rooftop solar system has become the first and the largest renewable energy project that has come into operation in the country so far. Nepal Electricity Authority is constructing a similar 25-megawatt solar project with the funding of the World Bank in Nuwakot.

Under the solar project, the Chinese side installed solar panels on the roofs of altogether 21 government buildings on the premises of Singha Durbar, which can generate up to 1.3-megawatt electricity. The installation work at Singha Durbar had started in November 2016 and was completed in January 2018.

The system was installed by the consortium of China State Construction Engineering Corporation and Sichuang Suyang Environmental Protection Engineering Co Ltd. The ministry officials said the Chinese side installed the project with the grant assistance of 37 million RMB, which includes maintenance cost of the system for the next five years.

Speaking after the inauguration, Prime Minister Oli said that the renewable project installed in Singa Durbar will encourage others to follow suit and promote renewable energy in Nepal. “I want to thank the Chinese side for completing the project in a short period of time. We have signed to be part of the Belt and Road Initiative and it has opened up new avenue for cooperation in multiple areas,” he said.

Similarly, Chinese Ambassador to Nepal Yu said that she hopes that the solar plant will be maintained and managed well, and will become a model project for Nepal to expand energy supply channels, strengthen electricity supply security and realize green development.

“A few months ago, the Chinese government donated to Nepal 34,000 sets of household photovoltaic equipment with total generation capacity of 750 kW. And prior to that, China had provided solar street lamps in Pokhara and solar power plants in Mustang. The Chinese government has been engaged in efforts to help Nepal to realize electricity development, and will continue to do so,” she said, adding, China is willing to continue as always to provide assistance and support to Nepal within its capacity to the economic and social development of Nepal.

Joint Secretary at the Energy Ministry, Ghimire, said that the solar system installed in Singha Durbar will help cut electricity bills of the ministries.

JUMLA, Feb 16: After the successful completion of the local elections conducted for the first time in 20 years, the locals... Read More...