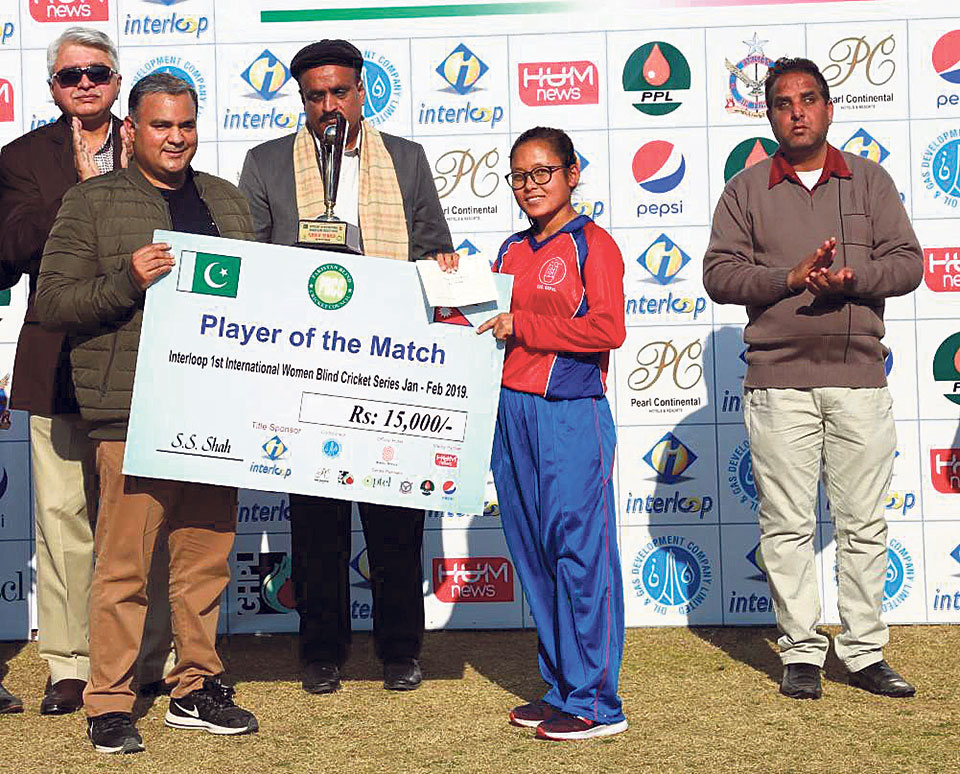 Nepal blind women’s cricket team’s Bimala Rai is handed over the player of the match award after the fourth T20I series cricket match against Pakistan in Faisalabad, Pakistan on Sunday. Photo: Republica

KATHMANDU, Feb 4: Nepal blind women’s cricket team has created history by becoming the first team to win an international T20I series with a 3-0 lead in five matches after it defeated Pakistan by nine wickets in Faisalabad on Sunday.

Nepal has now won three matches in the series, with one more to be played and one abandoned due to rain.

Nepal defeated Pakistan by 10 wickets each in the first match played in Lahore and the third in Rawalpindi. The second match in Faisalabad was abandoned due to rain.

In the series-winning match on the day, Nepal chased the target of 102 runs losing one wicket in 8.5 overs.

Earlier, Pakistan made 101 runs for the loss of seven wickets in the allotted 20 overs. Kiran Rafique scored the highest 16 runs, while opener Tayawa Fatima hit 13 runs.

Captain Binita Rai, Aryal and Aayushma Chhetri took a wicket each, while four Pakistani players were run out.

IN PICS: Landslides in Gandaki Province
22 hours ago

Authorities warn another locust swarm  may enter Nepal
7 hours ago

Authorities warn another locust swarm  may enter Nepal
7 hours ago