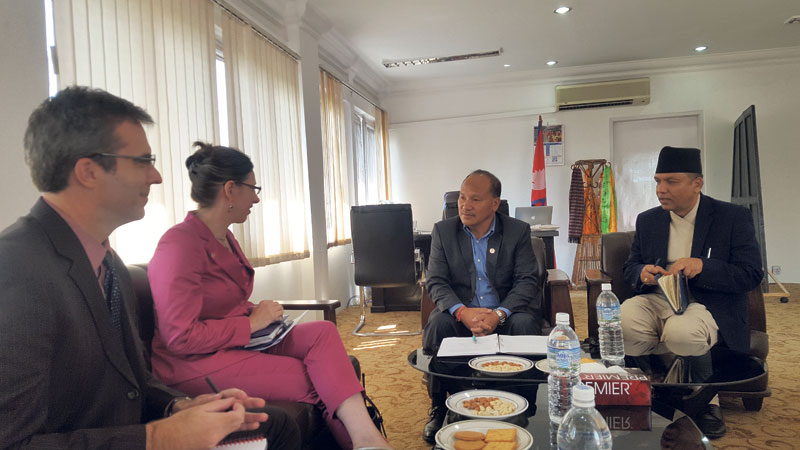 KATHMANDU, Oct 18: Nepal has requested the US to increase investment in promoting trade between the two countries.

During a meeting held at the Commerce Ministry on Tuesday, Minister for Commerce Romi Gauchan Thakali asked US Ambassador to Nepal Alaina B Teplitz to increase investment in promoting bilateral trade as strengthening trade and business relations would be beneficial to both countries and their people.

He also called on the US side to extend investment, along with transfer of technology, in Nepal so as to increase the production and productivity of those products which have high export potential in the US market.

With the promulgation of the constitution by the Constituent Assembly last year, Nepal has embarked on the path of economic revolution, he said, adding: “Nepal requires support from its development partners, including the USA, to expedite its economic growth and prosperity.”

As new constitution adopts a liberal economic policy as the state’s main directive principle for economic advancement, Thakali called on US investors and entrepreneurs to capitalize Nepal’s conducive economic environment as ensured by the constitution.

Recalling some of the recently enacted acts and regulations, such as the Labour Act, the Industrial Enterprises Act, the Special Economic Zone Act, the Commerce Minister said the present government was very much determined to create an investment-friendly environment and protect the interest of investors under all circumstances.

He urged the US side to enhance its investment in the tourism, hydropower and agro-processing sectors which had ample potential for producers and exporters wishing to invest in those sectors. Thakali also urged the US ambassador to enhance US support to the government in implementing some of the key projects as envisioned in the recently-launched Nepal Trade Integration Strategy (NTIS) 2016 and the Nepal Trade Policy 2015.

Thakali also expressed hope that the US would continue its support to Nepal for its development and help Nepal achieve its goal of graduating from the LDCs status by 2022.
Recalling understandings made at the second TIFA Council meeting held in Washington, DC, in June, he extended an invitation to the US side to participate in the third TIFA Council meeting scheduled to take place in Kathmandu next year.

Teplitz, on the occasion, expressed hope that bilateral trade and investment relations between the two nations would be further enhanced during her tenure. Mentioning that the US-Nepal friendship was based on trust, goodwill and mutual cooperation, Teplitz said the bond of mutual ties between the two countries had tremendously grown over the years.
Welcoming Thakali’s statement at the BIMSTEC Business Summit held in New Delhi on October 14, Teplitz also noted that the BIMSTEC process would be helpful for Nepal to enhance its connectivity and trade to other members of the region.

“The US stands ready to support Nepal in its development efforts,” she said. Calling TIFA a milestone document, Teplitz said she hoped it would bring tremendous opportunities for businessmen and entrepreneurs from both sides in the days to come.

The ambassador expressed some of her government’s concerns, including the establishing of a one-stop service -- single window -- for investors, clarity on area of investment to be made by foreign investors, and the possible amount of return that can be taken back by the investors, among others, to be well-reflected in the proposed legislation of Foreign Investment Act being prepared by Nepal.

She also assured Thakali that she would convey his message to American investors and entrepreneurs about increasing their investment in tourism, hydropower and agro-processing industries. She said her country’s interest in extending support in value chain in the agriculture and intellectual property, among others.

Commerce Secretary Naindra Prasad Upadhaya and other senior officials from the ministry, and Kevin C Price, the Economic and Commercial Officer at the US Embassy in Kathmandu, were present at the meeting.