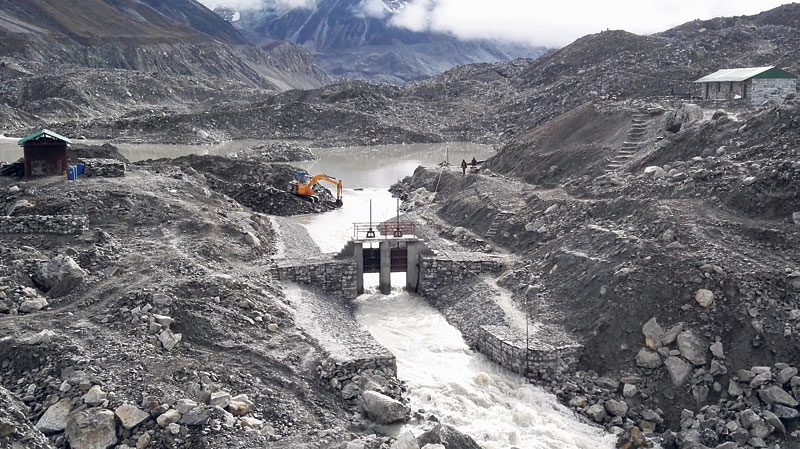 A general view of the Imja glacial lake and an outlet constructed by Nepal Army to drain the water from the lake to prevent possible outburst. (Photo Courtesy: Nepal Army)

KATHMANDU, Nov 12: “Ever since the army assigned me the pilot project, I was haunted by the daunting task,” said Lieutenant Colonel Bharat Lal Shrestha, who led the Nepal Army team in draining water from the Imja glacial lake to a safe level. Imja in Solukhumbu.district is one of the potentially dangerous glacial lakes of Nepal.

The challenge at those high altitudes was well-understood before-hand and taking it on was no straightforward matter, the army personnel involved recalled after returning to Kathmandu.

Lack of experience, inadequate equipment and lack of engineers were part of the challenge.

“It was important for everyone working there to remain psychologically robust rather than just physically fit.” Before the high-altitude team was chosen, the army tested the men for condition of heart, lungs, kidneys.

Under the guidance of the Nepal Army, about 40 personnel working in high altitude regions were selected for the pilot project located at an altitude of over 5,000 meters. The involvement of some 100 high altitude workers from the local areas made the task a bit easier.

"Because of the thin oxygen in the air, the workers encountered insomnia, some levels of stress and recurring fatigue,” Colonel Shrestha said, adding that loss of appetite added to the problem.

Due to these natural difficulties, the officer had the challenge of keeping up the morale, even if this meant providing extra hot soup, tea, coffee or energy drinks.

“Neither army personnel nor Sherpas could work more than 2 to 3 hours in a shift,” he said.

The high altitude workers were supposed to begin their task in April but because of the logistical challenges, they had to push things back till June. Once the manpower was in trim for the challenge, airlifting the logistics was the other major headache.

An excavator was dismantled but even the dismantled pieces exceeded 1,000 kgs each, a daunting challenge for the lift helicopters. Shrestha said, “After much effort we were able to find a small-size excavator in Kathmandu for dismantling.” Not only that, the machine also needed extra treatment--addition of some chemicals to the engine oil-- before it could be used in the cold conditions.

Astonishingly, of the approximately 7,000 sacks of cement used in the construction, each sack ended up costing Rs 25,000 to 28,000 because of the airlifting and transporting by yak, the project coordinator said.

The challenge could not wait. “We had to import a special chemical from Norway to make the cement set in the channel for draining out the water,” he said. “And it took time to set before we could begin the draining.”

We have now become capaable of reducing the water level by 3.5 metres within five months and saved  downstream villages from  the danger of glacial lake burst.

Echoing the project coordinator, Nepal Army spokesperson Brigadier Tara Bahadur Karki said, “The unique experience has not only helped mitigate the risk  but also boosted the morale of the entire army, and also boosted national pride.”

The Nepal Army is proud to have successfully completed the project with no human casualty, unlike in other countries, Karki said. Many national and international firms declined to participate in the bidding for the project, citing the high risk of human casualty and the unpredictable challenges of nature, according to the Department of Hydrology and Meteorology.

Mitigating such risk is a first for Nepal and one could make good use of the experience gained by the Nepal Army in the days to come, said Top Bahadur Khatri, project manager of the UN-funded Community Based Flood and Glacial Lake Outburst Risk Reduction Project. The draining of the glacial lake is part of a UN project to help Nepal deal with the impact of climate change. The UN had provided USD 3 million and  some additional amounts have been spent on installing an early warning system for downstream communities, according to Khatri.

With the construction of the outlet, some four million cubic metres of water accumulated over past decades was released. According to the department, Nepal is home to some 3,000 glacial lakes, of which four high-risk lakes are yet to be drained. Imja is one of the fastest growing glacial lakes. It is 180 metres deep, 2 km long, 650 metres wide and covers over 130 hectares.

50,000 metric tons of wheat required to address shortage
36 minutes ago