‘Nepal and Bhutan are facing similar problems due to climate change’ 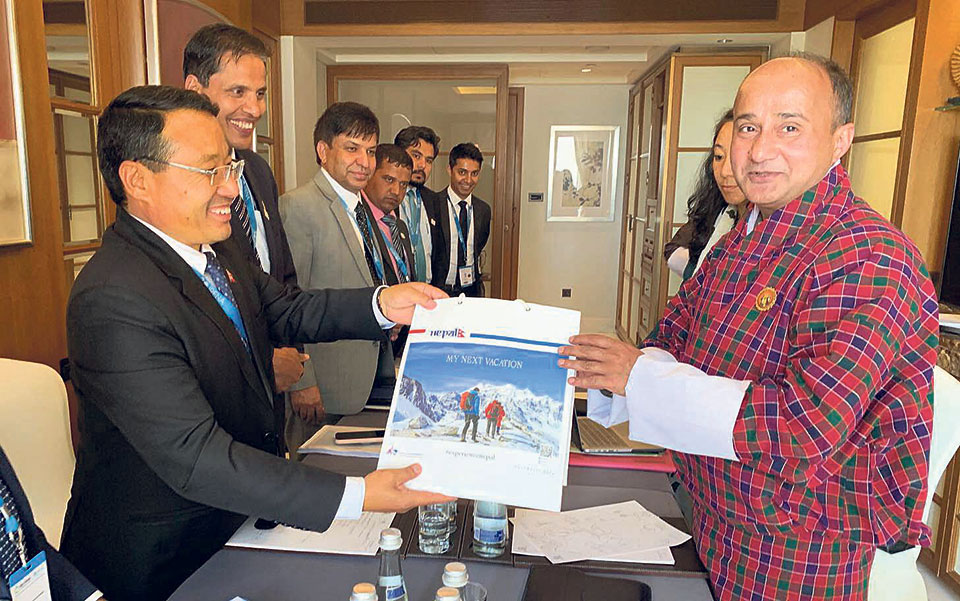 KATHMANDU, Jan 11: Minister for Energy, Water Resources and Irrigation, Barshaman Pun has said that Nepal and Bhutan are facing similar problems in the energy sector.

Mentioning geographical and climate similarities, Pun in a sideline meeting with the Bhutanese Minister for Economic Affairs, Loknath Sharma said that the two countries have been facing similar problems because of climate change. The ministers were in the United Arab Emirates (UAE) for an annual conference of the International Renewable Energy Agency sat on a sideline meeting on Friday and discussed the prospects the two countries had in the energy field. The ministers agreed on solving the problems together.

Pun mentioned, "Standing in the same position, we need to have a similar voice and put it forward in the international platforms to solve problems of renewable energy and hydroelectricity sector." He further added attention of the world can be drawn in the contemporary issues and problems of climate change Himalayan countries have been facing. "We stay in the fright of unexpected flooding caused by the melting of mountains due to climate change that might affect hydroelectricity projects and other development infrastructures," Pun further added.

Similarly, Bhutanese Minister Loknath Sharma said that the two countries will have the same voice in regard to the issue in international forums. Stating that the two countries have made huge investments in the hydro sector, he showed the determination to collaborate with Nepal to be safe from the negative impact of climate change. "There are lots of market scopes in India and Bangladesh if both Nepal and Bhutan can generate huge amounts of electricity," he said.

Meanwhile, in a meeting with Francesco La Camera, director-general of the International Renewable Energy Agency, Minister Pun proposed collaboration in the development of renewable energy in the future. Talking about Nepal's newfound stability in politics, Pun said the country also has stable policies. "Nepal now has the appropriate opportunity and environment for foreign investment in the energy sector," he said. He appealed for investment in the energy sector in Nepal in the meeting with Camera.

Director-General Camera appreciated the development of solar energy in Nepal. "The agency will provide technical and financial assistance to Nepal for the promotion of solar energy," he said.