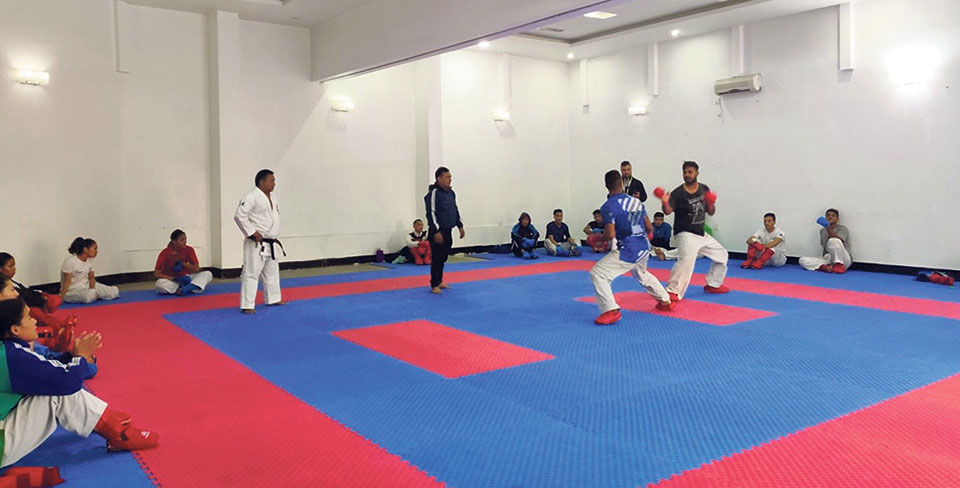 Karate had first debuted in the SAG and Nepali karateka began with a golden note winning 14 gold, a silver and a bronze out of total 31. Nepal had won 14 gold in Taekwondo, two in boxing and one in swimming.

The result established Nepal as the power house of martial arts. The Member-Secretary of Nepal Sports Council (NSC) Ramesh Kumar Silwal went onto state that Nepal has high chance of winning 50 gold medals in 13th SAG and majority of them will come in martial-arts.

However, after the early hay-days, the later years was not as brilliant as the eighth SAG as the medals in Karate significantly depleted.

But after nine years the Nepali Karate team is determined to change the beginners’ luck status in the upcoming Games—which is scheduled to be held in Kathmandu and Pokhara from Dec 1 to 10--and they have the home venue advantage.

Coach Kushal Shrestha isn’t quite optimistic to the fact that Nepal could be able to repeat the feat of the eighth SAG but is adamant Nepal can definitely do better than the previous three editions.

“We cannot underestimate players from other participating countries. Pakistan’s Saadi Abbas Jalbani is a top favorite. He was the only karatake from South Asia to win a gold medal at the Asian Karate Championship. Sri Lanka and Bangladesh are good as well,” said the gold medalist of the 10th SAG. “Yes, we have only managed three gold so far since the first participation and other countries are becoming a global competitor. But Nepal still remains a strong favorite in martial arts. I don’t say we can repeat the history of eight SAG but we are confident we can improve our tally this year.”

The 11th SAG gold medalist Binod Shakya and silver medalist Anu Adhikari will compete for another glory this year as well. Their participation as the previous medalists will definitely boost the chances of bringing medals to Nepal.

Head coach Madan Upreti said the inclusion of Karate in the Games has made the players excited and equally confident.

“We are confident our players will give their best like the eight SAG. We are hoping at least eight gold in this edition,” he said.

Despite a visible gap, Nepali karate players are not deprived from exposure at international championships.

“Our players are ready. Our preparation is better than before,” said Shrestha. A total of 31 players (17 male and 14 female) are currently training in a closed camp in Gaushala, who will compete for 19 gold medals: nine in women’s and 10 in men’s category.

KATHMANDU, May 10: A total of 625 athletes will be participating in the 13th South Asian Games (SAG) from Nepal. Read More...

At War With a Virus
18 hours ago

PM under pressure to probe medical procurement deal
19 hours ago

Australia's tour of Bangladesh postponed due to coronavirus
7 hours ago

IN PICS: Rhododendron forest remains silent amid COVID-19 lockdown in Panchthar
9 hours ago

Sub-Saharan Africa to fall into recession in 2020, says World Bank
15 hours ago