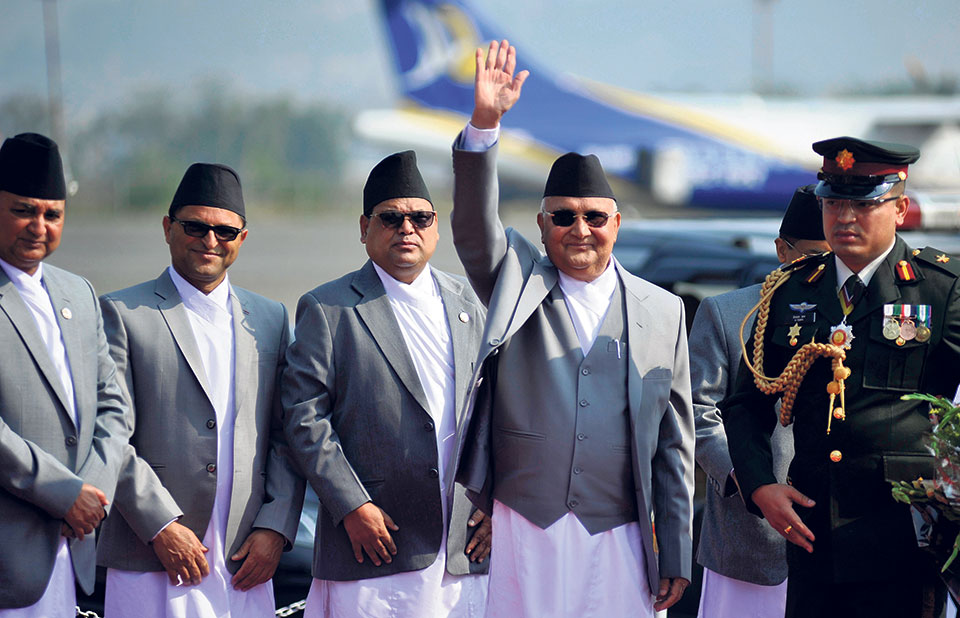 KATHMANDU, April 7: Prime Minister Khadka Prasad Oli has urged Indian businesspersons to seize the business opportunity in Nepal, stating that their next door neighbor is a ‘virgin land’ for investment.

Addressing a business meeting organized by Confederation of Indian Industry (CII), Federation of Indian Chambers of Commerce and Industry (FICCI), and The Associated Chambers of Commerce of India (ASSOCHAM) during the prime minister’s three-day official visit to India, he also tried to portray a favorable investment climate of the country to the Indian private sector.

“Indian investors have invested across the globe, so why not go to the next door Nepal? Geographical proximity, easy access, and cultural similarities are all there to make you feel good about Nepal,” he said.

During his speech, he tried to make the formation of stable government a major selling point to lure investors to come to Nepal.

“We have a strong government at the center that enjoys majority of three-fourth membership of the lower house. Stable government means stability and continuity in the policy regime,” he said. “Our law permits full repatriation of income earned from investment and reinvestment.”

“Foreign companies registered in Nepal can purchase, own, and sell land. There is no discrimination between national and foreign investors and no nationalization of private industry. Double Taxation Avoidance Agreement has been signed with India.  We are discussing the new version of bilateral investment agreement.”

Also addressing the business meeting, Bhawani Rana, president of the Federation of Nepalese Chambers of Commerce and Industry (FNCCI), said that Nepal’s private sector was looking forward to share the prosperity from India’s economic development by fully utilizing the close and traditional ties for mutual benefit.

“One of the areas we always look forward to from India is investment in Nepal, and promotion of trade synergies,” Rana said.

“As Nepal is marching towards the path of economic development and prosperity, in order to reduce the widening trade gap between us, we seek greater Indian investments in Nepal, to help us in our path toward sustainable economic development,” she added.

Highlighting that some Indian companies have started expanding their investment in Nepal, she urged her Indian colleagues and counterparts to grab the vital opportunity, while Nepal needs a massive investment and the government is also very eager to welcome foreign investment.

Asparagus price reaches Rs 5,000 per kg in local market due to surging demand amid low supply
28 minutes ago