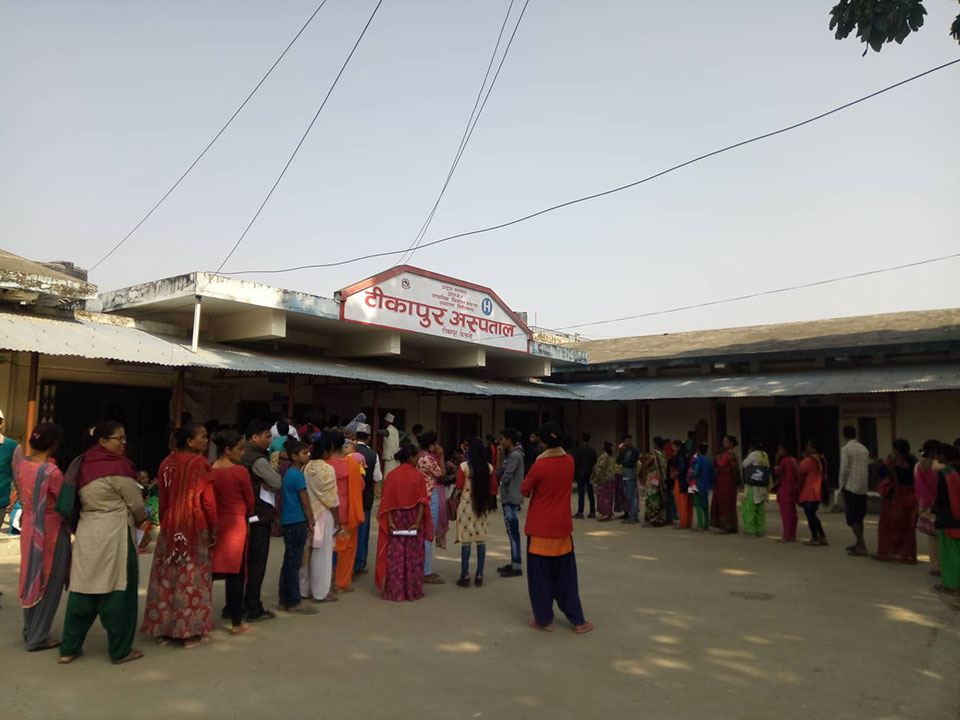 Even though the NICU unit was established here back in 2011 with support from KOICA, an organization based in South Korea, the hospital was not able to provide service due to lack of expert medical practitioners.

This time, Tikapur Municipality took the initiative to appoint neonatal care expert in the hospital to start the service for the newborns. Pediatrician Dr. Amarnath Thakur has been appointed for the purpose. Dr. Thakur was providing service from Nepalgunj hospital since long.

Tikapur Municipality has allocated Rs 2.6 million from its budget for the current fiscal year to pay for the doctors providing NICU service. According to Mayor Tapendra Bahadur Rawal, this was a long-awaited service in the region and it is expected to give a huge relief to the locals.

“This hospital is visited basically by the poor people. And when there is no proper care for newborns and children, they are forced to go to India or Kathmandu. That would cost a lot of money. We hope that this service will give relief to many people,” he said. He added that apart from what the municipality has arranged for the specialist doctor in the unit, support from other stakeholders is also being sought. The budget allocated by the municipality will keep the service going, but additional arrangements are necessary in order to improve the service, Rawal said.

Child care services are considered very expensive in any hospital. Equipment and technology account for a huge cost. According to Mayor Rawal, the municipality is willing to further improve the unit and the entire hospital. “The hospital provides service for a huge population here.”

According to Ratan Khadka, president of the hospital development committee, Dr. Thakur has notified the hospital of the required human resource and equipment in order to operate the service effectively.

“And we are trying to fix everything possible. Both human resource and tools are now our priority,” Khadka said.

During the inauguration, Khadka presented the hospital’s annual plans. He talked about long-term and short-term plans of the hospital and also shed light on a few immediate steps being taken for making health service better.

As per the report, 10 staff nurses and eight office assistants are needed at the hospital in different departments. Similarly, the hospital has emphasized on the need of a ventilator.

“This service, though inaugurated today, will go full-fledged from next week. Starting it is not a big deal but giving continuity to quality service is more important. We are aware of that,” said Khadka.

According to medical superintendent Dr. Narendra Khanal, the neonatal care unit will handle even serious cases of newborn and older children. Earlier, the hospital would refer such cases to other hospitals.

“Though we did have delivery service here, we were not in a position to handle complicated cases of newborns. So, we needed to immediately refer such cases elsewhere. This would not only risk the baby’s health but also would turn too costly for parents,” said Khanal.

The building of the unit with 26 beds and three cabins was constructed for Rs 550 million. Three years ago, the government had given permission to the hospital to operate 51 beds although there were not much resources and machines to operate the 50-bed hospital.

“After the building was made, the government later allowed us to have 51 beds. But just adding beds would not ensure quality service. Even now, we fall short of several things including human resource. We are however trying to fill the gap,” remarked Khanal.

The hospital, which is considered the second biggest in Kailali, is operating emergency, OPD and other services.

“This is the hospital visited by thousands of people who cannot afford expensive treatment. People of eastern Kailali go nowhere else but here. Similarly, people of western parts of Bardiya to come here for treatment. They go elsewhere only after we refer them outside,” said Khanal.

He added that the hospital needs to be upgraded in order to provide quality service.

“We hope the local and provincial governments will also take interest in this matter. Hospital or health service is not something people should compromise with.”

KATHMANDU, Feb 2: Agni Foundation, the non-profit organization of Agni Group, has provided financial and other support to renovate the... Read More...

TIKAPUR, Dec 25: Safe Motherhood is one of the government’s topmost priorities. For this, maternity units have been opened at... Read More...