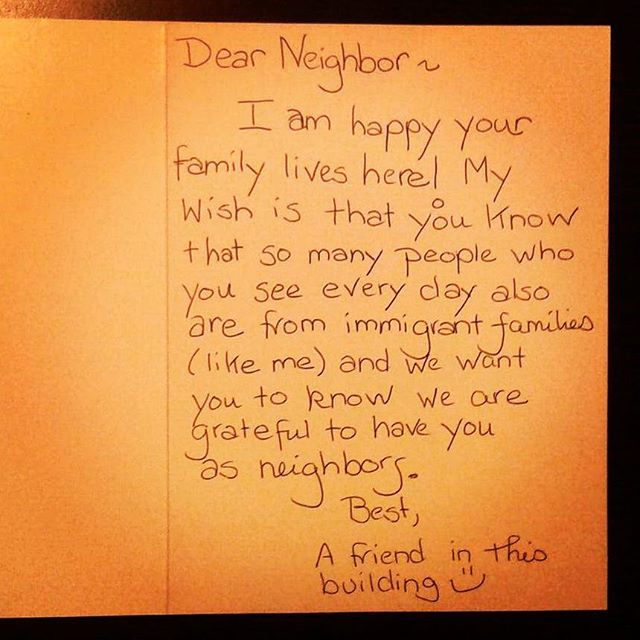 Emre Celik, a resident of Australia and President of Rumi Forum announced a Muslim friend living in the US received an anonymous letter from his neighbor, reassuring him to not worry about Trump and his anti-Muslim anti-immigrant slogans, and that they were very happy to have them in America.

In a moving gesture of unity and empathy, after the majority of the American population voted the controversial Donald Trump as president creating fear in the hearts of immigrant families and Muslims settled there, also giving White supremist racism an open outlet, a kind neighbor opting for anonymity felt it incumbent upon himself to assuage a Muslim neighbor’s fears residing in the same building and to express solidarity over their plight.

The neighbor, who too is from an immigrant family, wrote the note which says, “Dear Neighbor, I’m happy your family lives here! My wish I that you know that so many people you see every day also are from immigrant families (like me) and we want you to know we are grateful to have you here as neighbours. Best, a friend in this building.”

The polling results that came in two days ago, announcing Donald Trump as the President-elect of America in shocking move, have not only brought the diverse coloured races and ethnicities residing in America together but divided the White population of the country as well, with protests being held in major cities  demanding the impeachment of the new President. The protests which are now in their second day, go to show that not all Americans want to drive other ethnicities and races out of America, and subjugate their women, which has been the underlying rhetoric of Trump’s campaign.