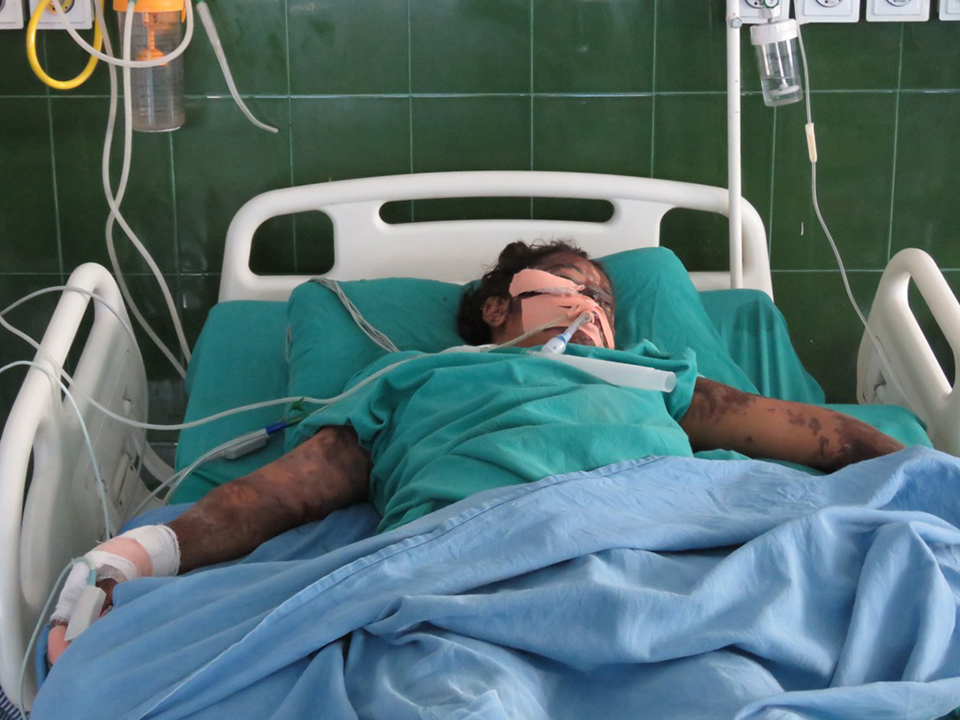 Basanti Pariyar who has been undergoing treatment at Bharatpur Hospital following an acid attack.

CHITWAN, Sept 26: A woman in Kawasoti Municipality-16 of Nawalparasi district sustained critical injuries after her neighbor poured acid on her and attacked her with a knife on Monday evening.

Basanti Pariyar, 27, was returning from a market fair held at Danda when her neighbor Bimal BK aka Khale threw acid on her and attacked her with knife leaving her seriously injured. She was rushed to Bharatpur Hospital at around 9 pm the same day.

According to Dr Suresh Pradhan, the doctor involved in Pariyar's treatment, 25 percent of her body has been severely burnt due to the acid attack.

Besides pouring acid, BK also attacked her mercilessly with a knife giving serious injuries to her stomach, chest, cheeks and head. Dr Pradhan informed that the victim's intestines were exposed due to the knife attack, her cheekbones have been badly injured and the knife that entered her chest touched her lungs.

Likewise, the acid has critically burnt her face, neck, chest, hands and eyes.

"She had to undergo surgery and now she is on a ventilator," said Pradhan.

The victim has a thirteen-year-old son and a seven-year-old daughter. Her husband Yam Bahadur Pariyar said he has no idea why his neighbor attacked her despite having a good relations with him.

"We have just learned that he had been planning to kill my wife for over a month," said Yam Bahadur, adding, "And that he had brought acid from Birgunj to attack her."

The family members searched for BK immediately after the incident but he was nowhere to be found. Later, he himself surrendered to the police. BK is currently in detention at the Kawasoti police station.

My sister was suddenly attacked with acid and knife: Mithu Pariyar

Our home is a couple of blocks away from the highway. We both sisters got married in the same family. Yesterday, my sister and I had visited a fair with our cousin sister. While returning home, I was ahead of them while my sisters were walking together. Then, we saw him (Khale) following us. He often used to call us but yesterday he didn't.

Suddenly, he grabbed my sister by the hair and poured acid on her. We ran to her as she started crying and screaming. Later, he pulled out a knife and started attacking her. With the help of some other women we stopped him. This heinous incident occurred at around 7 pm and just a few minutes away from our house. We had never expected that somebody who has been sharing the same compound with us since so long would ever do this to us. The assailant has a daughter and a wife.

KATHMANDU, Sept 25: The government has introduced a much-awaited ordinance in an apparent bid to punish acid attackers and discourage... Read More...

CHITWAN, Sept 25: Although a survivor of acid attack in Chitwan, underwent successful surgery at Bharatpur Hospital, she is still... Read More...