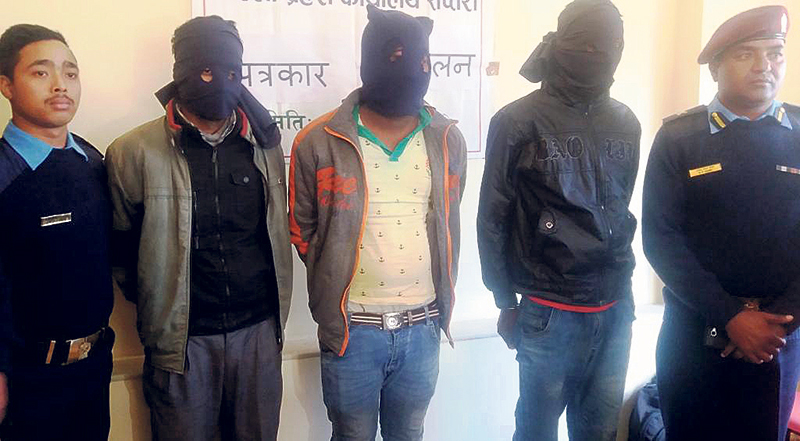 RAJBIRAJ, Dec 16: Police recovered the dead body of a minor from a septic tank on Thursday after 21 days of abduction.

Eight-year-old Durgananda Sah, son of Ram Govinda Sah, of Haripuir VDC-3, had been abducted on November 26. The kidnappers had asked for ransom five days after the abduction by sending a message on his mother's mobile.

“I have abducted your son. Arrange Rs 500,000 if you want to get your child back alive. If you inform the police, you will lose your child,” read the message. Police investigation has shown that the message for ransom was sent only after the minor was murdered.
Taking clues from the message and the senders' mobile number, police had arrested Chudamani Thakur, 27, a neighbor of the victim, Ram Babu Gupta Sah of Haripur VDC-1 and Kapil Dev Das of Deuri VDC-2, Saptari on Wednesday.

Further investigations revealed that Thakur had masterminded the crime while Sah and Das assisted him. In his statement, Thakur admitted that he kidnapped the minor for ransom and killed him in fear of being identified.

“The victim's body was recovered from the septic tank of another neighbor, Pane Lal Sah,” informed Dibesh Lohani, superintendent of police. The body has been sent to Dharan-based BP Koirala Institute of Health Sciences for post mortem.

BIRGUNJ, July 25: Three boys including a minor have been arrested by police on the charge of raping and murdering... Read More...

NEW DELHI, April 18: In another shocker, a 12-year-old mentally challenged girl was raped by her neighbour along with two of... Read More...