KATHMANDU, Feb 18: The National Examination Board (NEB) has cancelled the examination of a student who had made a TikTok video during the board examination of Grade 12 held earlier in November.

The exams of Roshan Kumar Shahi,a 12th grader at the Dailekh-based Kalika Secondary School, have been cancelled, according to a press statement issued by the NEB.

Shahi who sat for Grade 12 exams held in November had made a TikTok video of the activities carried out during the exam hours and uploaded it on social media, the NEB statement further reads.

Similarly, the NEB also recommended to the Ministry of Education, Science and Technology to take departmental action restricting teacher Kamal Bahadur Shahi, who was assigned as supervisor at the school, and the principal of the school Chakra Bahadur Shahi and bar them from participating in any examination conducted by NEB for three years.

The TikTok Video by Shahi had gone viral soon after it was uploaded on social media. 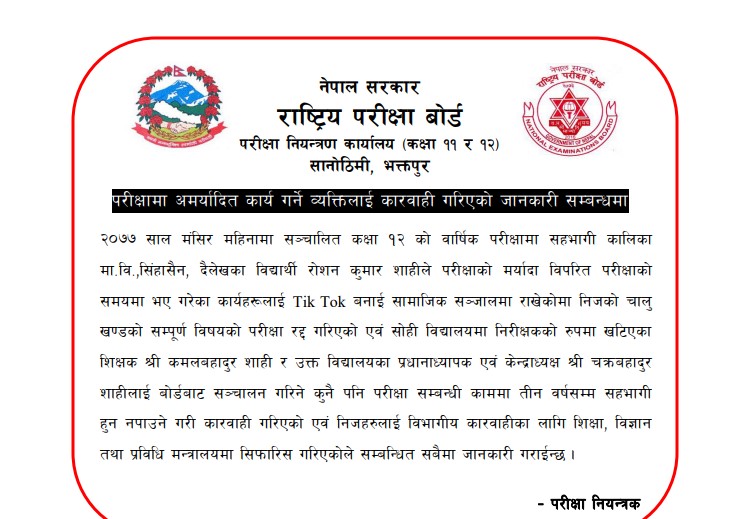 KATHMANDU, March 10: The board examination of grade 12 students is set to begin from June 9, according to the... Read More...

Grade 12 results likely to be published within this week

KATHMANDU, Jan 17: The National Examination Board (NEB) is preparing to publish the results of Grade 12 by January 23.... Read More...

KATHMANDU, Sept 16: The National Examination Board (NEB) has recommended the government to conduct online tests worth 40 marks for each... Read More...