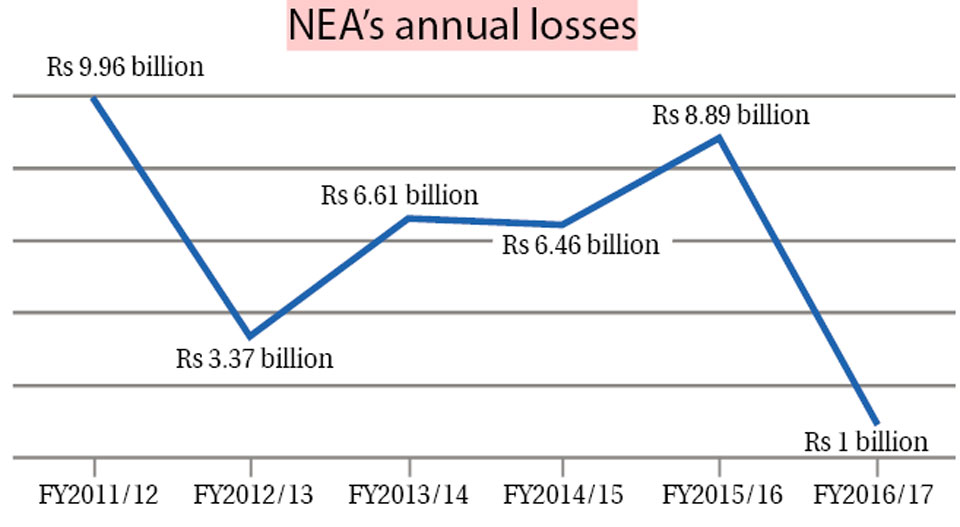 KATHMANDU, August 2: Nepal Electricity Authority (NEA) managed to bring down its annual loss to below Rs 1 billion in Fiscal Year in 2016/17, significantly down from a record high loss of Rs 8.89 billion in 2015/16.

Efficient management, hike in electricity tariff and reduction in technical loss have been attributed for the significant progress in the state-owned power utility's accounts in the last fiscal year.

According to a preliminary report of NEA for 2016/17, hike in electricity tariff by 18 percent from mid-July last year and reduction in technical loss by 2.5 percentage points to 23 percent helped the NEA to post revenue growth of 43 percent to Rs 46 billion in the last fiscal year.

“Along with reducing technical loss, end of power cut in the urban areas, which led to higher energy consumption, helped NEA to post revenue growth,” Prabal Adhikari, the spokesperson for the NEA, told Republica. “Effective demand side management and substantial reduction in power cuts from October last year were the major factors behind these remarkable achievements of our Managing Director Kul Man Ghising.”

NEA consumers, mainly in the urban areas, were surprised to get unhindered power supply from October last year. Power cut in other parts of the country also has been limited to few hours. Better demand side management and efficient management by Ghising and his team have worked wonders for the power utility.

Similarly, import of cheaper electricity from Dhalkebar-Muzaffarpur Transmission Line compared to other lines also helped to improve balance sheet of the NEA compared to previous years. Earlier, the NEA management was saying that its loss was swelling as it was importing electricity at higher price and selling at cheaper price.

“These achievements have made us hopeful that we will soon start earning profits,” said Adhikari.

NEA officials also said that their efforts to reduce technical loss were affected to some extent as security personnel remained busy for local level elections.

Import of energy by the NEA, however, increased by 22 percent to 2,175 GWh in the last fiscal year.

The NEA plans to unveil details of revenue and expenditure in its anniversary celebration program to be held in Kathmandu on August 17.

The improvement in financial health means NEA will not be the public enterprise posting highest annual loss in 2016/17. Last year, NEA's energy output dwindled due to low rainfall in catchment areas of major projects like Kulekhani reservoir and Kaligandaki 'A' hydropower project.

In the fiscal year 2015/16, NEA's technical loss had increased by 1.34 percentage points to 25.78 percent, making mockery of the utility's plan to reduce technical loss by a minimum of 1 percent. According to technicians, technical loss of NEA is below 20 percent. The loss has never come down to this level in the past decade, they added.

The government had written-off the NEA's accumulated loss of Rs 27 billion in 2010.

Despite this, its accumulated loss climbed to Rs 36.29 billion in the next six years.

NEA's energy loss can be reduced to 12 percent: Ghising