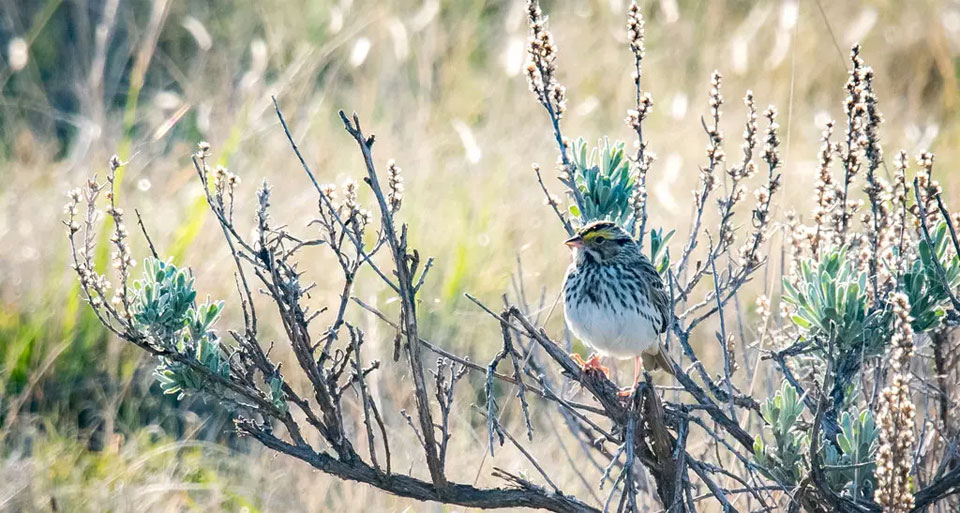 If a sparrow sings his heart out on an oil field, but his would-be sweetheart can’t hear him above the oil pumps, what’s a bird to do?

In Alberta, Canada, researchers analyzed hundreds of hours of Savannah sparrow love songs and discovered something extraordinary: To be heard above the din, the birds are changing their tune in complex ways that scientists are only starting to understand.

“They’re tailoring their songs depending on which part of their message is the most affected,” said Miyako Warrington, a University of Manitoba biologist who led a recent study on how sparrows cope with noise from the oil and gas infrastructure that dots Canada’s landscape. “This seems to show a complex level of adaptation. It’s not just everybody talking louder.”

Dr. Warrington is one of a growing number of scholars who study the noise generated by human activity — drills, turbines, roaring jet engines — and how that affects the natural world around us.

Mining on the fringes of the Brazilian rain forest, for instance, is disruptingthe calls of local black-fronted titi monkeys, a study found last year. Whales and dolphins are known to be particularly vulnerable to the groans of ship engines or offshore drilling, which can disrupt the complex ways they communicate. Research has shown that noise pollution has doubled the background sound levels in more than 60 percent of protected areas in the United States.

And humans are not immune to the din. Epidemiologists have linked traffic noise to cardiovascular and other diseases.

Scholars of bird song have long noticed that avian city dwellers sound different from their peers in the country. But Dr. Warrington wanted to understand how wild birds adapt to the pumps and drills that oil and gas development has brought to wide swaths of North America.

Her team at Manitoba decided to focus on the mating call of the male Savannah sparrow, a bird slightly larger than a tennis ball with handsome, streaky feathers and a dash of yellow above the eye. Once commonly found on North America’s grasslands, Savannah sparrow populations are on the decline as their natural habitat has dwindled.

In the audio clip below, you can hear two of the birds calling: one in his natural, quiet environment, and one near a generator-powered oil-well screw pump — a raucous machine with a rotating screw that pulls petroleum from the ground.

To the human ear, the difference between the two birds’ songs may be subtle. But the visualization shows the midsection buzz transforming into a more piercing screech to overcome the pump’s din.

In a quiet environment, the male sparrow’s love song is a string of playful staccatos followed by a throaty buzz and a final, triumphant trill. Using past research on sparrow songs, Dr. Warrington offered an approximate translation of what is essentially a pickup line: “Hey, hey, sexy, hey, I’m Bob, a Savannah sparrow, I’m sexy, sexy.”

Each bird, of course, adds its own quirks to its songs. To better understand an overall pattern of changes, the research team tracked and recorded 73 male Savannah sparrows at 26 sites within 200 kilometers, or about 125 miles, of the city of Brooks, at the heart of Canada’s oil country.

Over all, the team found that birds altered their songs most near generator-powered screw pumps — the device heard behind the second songbird in the recording above and the loudest of the four types of oil infrastructure studied. The most common difference was in pitch and in the opening notes and buzzy parts of their songs. Researchers did not find that the content of the songs changed.

There was no consistent change to the final trill. That appeared to be a personal flourish that male sparrows changed at whim. (In the recording, the final trill performed by the two birds is clearly distinct.)

Dr. Warrington and her colleagues are now looking at how changes to songs can affect a bird’s reproductive chances. Separate research on mountain bluebirds and ash-throated flycatchers in New Mexico showed signs of chronic stress in birds exposed to steady noise from oil and gas infrastructure. In some cases, their chicks showed signs of stunted growth.

“The birds are altering their signals — but are these birds fine then? No, evolution doesn’t work like that,” said Nathan Kleist, a postdoctoral researcher in conservation biology at Colorado State University and a lead author of the study in New Mexico. Industrial noise, he said, “is having impacts on wildlife that we are just now beginning to understand.”

In an early encouraging sign, a follow-up study of female Savannah sparrows’ mating behavior — reciprocal calls, flirtatious wing flicks, annoyed attacks — showed that the male birds may be successfully wooing their belles with their modified tunes.

“We were worried that by changing their pitch, birds that used to sound like, say, George Clooney would now sound like Bart Simpson, and that might mean the ladies never come,” Dr. Warrington said. “But what you hope for is that, in the face of noise, you change your voice, and it’s still good.”

Voters not ready to change their mindset

NTA calls off proposal to procure own satellite
22 hours ago