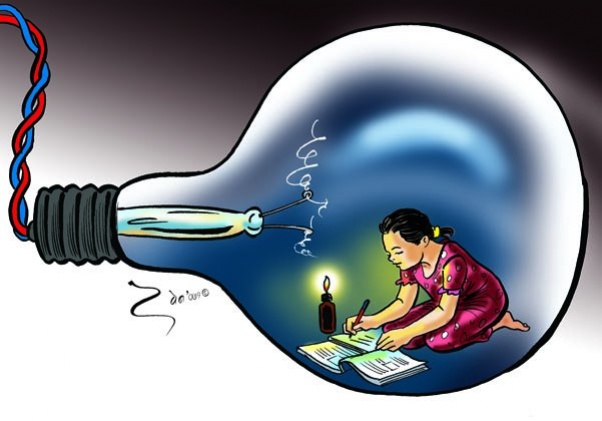 KATHMANDU, Dec 27: The Nepal Electricity Authority (NEA) is gearing up to end load-shedding throughout the country from mid-June next year. It has been providing round the clock electricity to the consumers in Kathmandu Valley since the Dashain festival.

NEA Spokesperson Prabal Adhikari told Republica Online that preparations are underway to end power cuts throughout the country learning from the power management in the Valley that saw an end to an enduring power outage.

For that, NEA has speeded up the works for reforms of electricity transmission and distribution systems.

Adhikari claimed that power outage will end throughout the country as the works for upgradation of Dhalkebar-Muzaffarpur, Kataiya-Kusaha, Raxaul-Parwanipur, Tanakpur-Mahendranagar among others cross-border transmission lines to import additional electricity from India are underway and internal generation will also increase.

“It was proven during the blockade and Madhes Movement that increased generation can’t only end load-shedding,” he said, “Although, most of the factories were closed, load-shedding shot up as we had a poor distribution system.

Currently, the demand for electricity throughout the country stands at 1273 MW. NEA has been generating 361 MW, 208 MW is generated by private sectors and 299 MW is imported from India. The current deficit stands at 405 MW.

“As water level in rivers further decreases during dry season, power generation from the run-of-the-river projects will decrease by 125 MW,” he said, “Electricity shortfall will hover around 530 MW from mid-January to mid-March.”

To meet the demand at that time, NEA has recently signed an agreement with Power Trade Corporation, India to import a total of 120 MW through the Dhalkebar-Muzaffarpur Transmission Line from January 1 to May 2017. Despite the import, the deficit will stand at 85 MW during mid-January to mid-March.

“There will be a shortfall of 85 MW during the period due to decrease in water level in rivers,” he said, “But, Kathmandu will continue to be a load-shedding free zone. Increase in power cuts by an hour is possible outside the Valley.”

As water level increases in rivers following melting of snow with the onset of summer, power generation in run-of-the-river projects shoots up. In such a situation, power cuts can end throughout the country, NEA stated.

NEA estimates that power demand has decreased by 50 MW in Kathmandu Valley as consumers have not operated heavy electrical equipments in support to the “Load-shedding Free Campaign”. Likewise, the demand has further decreased by 100 MW as around 200,000 inverters are no longer in use.

If the equipments are operated, the electricity demand will increase to 1,300 MW, according to NEA.

GORKHA, Dec 23: Prime Minister Pushpa Kamal has said that the preparations are underway to put an end to load-shedding... Read More...

KATHMANDU, May 4: Transport entrepreneurs have halted operation of vehicles across the country today apparently in a bid to press... Read More...

KATHMANDU, Nov 11: Six thousand laptops and other educational materials have been donated to approximately 140 community schools across the... Read More...