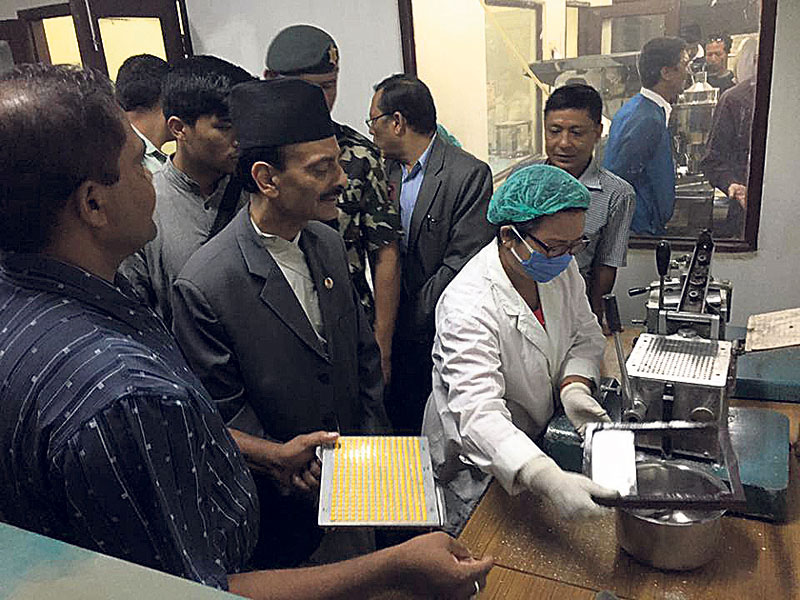 State-owned drug maker preparing to produce 48 types of medicines
KATHMANDU, Sept 28: Rajeshwari Tamrakar, who had been drawing salary without doing anything ever since Nepal Drugs Ltd (NDL) ceased production six years ago, is on a happy mood. She was seen wearing a white apron producing Neomoclyin at NDL's production plant in Babarmahal on Monday.

Not only Rajeshwari, all the employees of NDL are excited after the state-owned drugs producer started trial production on Monday.

NDL resumed operation in the initiation of Minister for Industry Nabindra Raj Joshi.
“We are happy to know that the industry is resuming production,” Rita Shrestha, another staffer of NDL, said. “We are happy to work and get salary rather than getting paid without doing anything.”

The cabinet decided to reopen the industry on Sunday. As per the decision, the government has decided to provide around Rs 140 million to NDL to resume operation.

The amount was provided to procure necessary plant for producing medicines as per the standards prescribed by the World Health Organizations' standard.

Officials say machineries are in condition to start production. “We have sought the required expenses to run the plant from the ministry,” they said, adding: “We are currently producing glycerin and distilled water.”

"We will be manufacturing some 70 types of medicine which the government has declared to distribute free of cost," Joshi said. He further added that the government was mulling over reopening other closed state-owned entities like Hetauda Textile Industry, Birgunj Sugar Mill, Agriculture Tools Industry, Gorakhkali Rubber Industry, Nepal Metal Company and Butwal Dhago Karkhana, among others.

According to the board of directors of NDL, the drug maker will start commercial production from next week after receiving permission from the government to import raw materials.

Currently, there are 97 employees in NDL's payroll. It had given golden handshake to 122 employees in the past few years. The government had spent Rs 280 million for the voluntary retirement scheme.

The Ministry of Finance used to provide Rs 2.1 million monthly NDL to pay salary for the employees.

The NDL, with paid-up capital of Rs 15 million, has Rs 900 million accumulated debt.
Countries like the United Kingdom, Germany and Japan had provided machineries to the company.

IN PICS: Landslides in Gandaki Province
19 hours ago