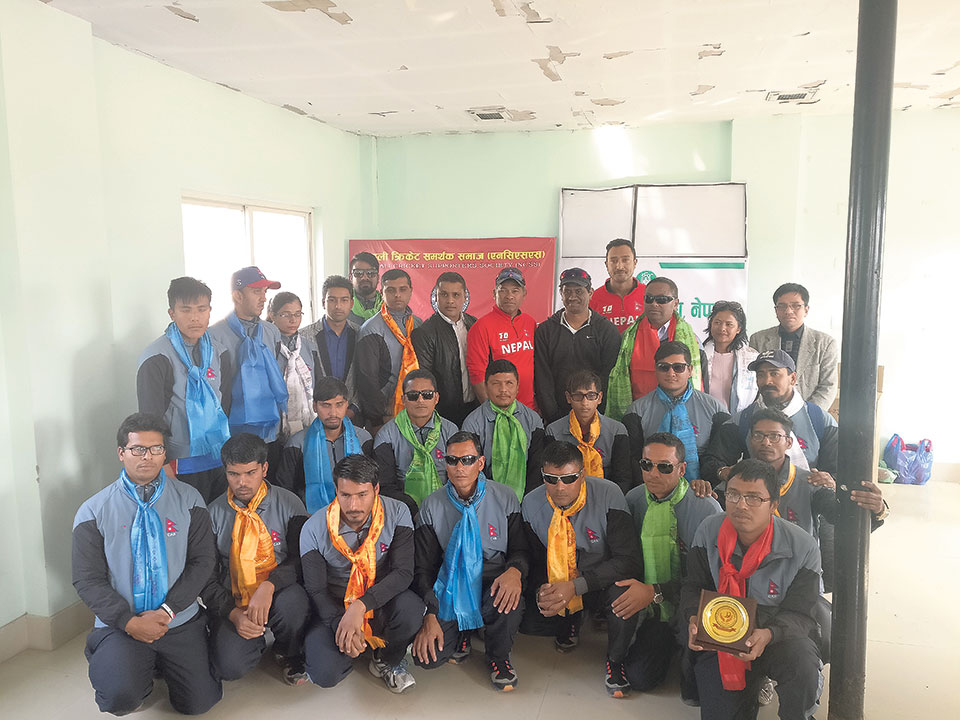 Members of national blind cricket team pose for a group photo during a felicitation program in Kirtipur on Monday. Photo: Rajan Shah

Skipper Khadka expressed his gratitude to the fan group NCSS and requested concerned authorities to come forward in a systematic manner to help Nepali cricket. “NCSS has done what the government was not able to do. I would like to thank everyone who contributed for the cause, and hope to see associations and corporate houses coming forward to help Nepali cricketers in future. There have been five world cups of the blind so far, but we have managed to play only one.

There is so much potential in them, and we need to provide our support to help them grow,” said Khadka. NCSS president Sigdel said he was both surprised and happy to see a small initiative making an exemplary impact nationwide. “I never thought we could raise this much money. All I wanted to do was to help blind cricketers, who suffered the hassles of travel. It turned into a ‘went in train, return in plane’ nationwide campaign. I want to thank everyone who contributed.”

“We have been transparent in everything we did, and want to say that national players should not feel isolated. We fans are always passionate to help them but also wish the related authorities to make necessary arrangements for our national heroes in future,” said Sigdel, in his closing remarks of the event.  From the total collected amount of Rs 727,129 in a two-week campaign carried out by NCSS volunteer fan group started with a Facebook group of the same name, 14 players were provided with Rs 22,000 each, and eight officials were handed Rs 8,000 who went to participate in the 5th Blind Cricket World Cup.

CAB was handed with Rs 50,000 cash. Rs 319,000 was invested to buy plane tickets for the 22-member team to return home from the UAE. They had traveled by bus and train to reach Pakistan from Gorakhpur to Wagha Border. Fly Dubai provided 30% discount in the total cost for the tickets. Nepal’s online payment portal Esewa was the official payment partner.

Two retiring players from blind cricket team including captain Kirtan Shrestha were felicitated by tokens of love. The batting consultant from India Sulakshan Kulkarni was provided with a memento by NCSS group.

WHAT HAPPENED?
As CAB did not have enough money to buy flight tickets for the team, the blind cricketers made a strenuous travel to Pakistan from Kathmandu, spending four days in bus and train, and took part in the Blind Cricket World Cup played from January 7 to 21.

Nepal lost to Pakistan, Bangladesh, Sri Lanka, and India but won against Australia to cap the tournament in a winning note. They could not make it to the next round.

Training for blind cricketers in Morang