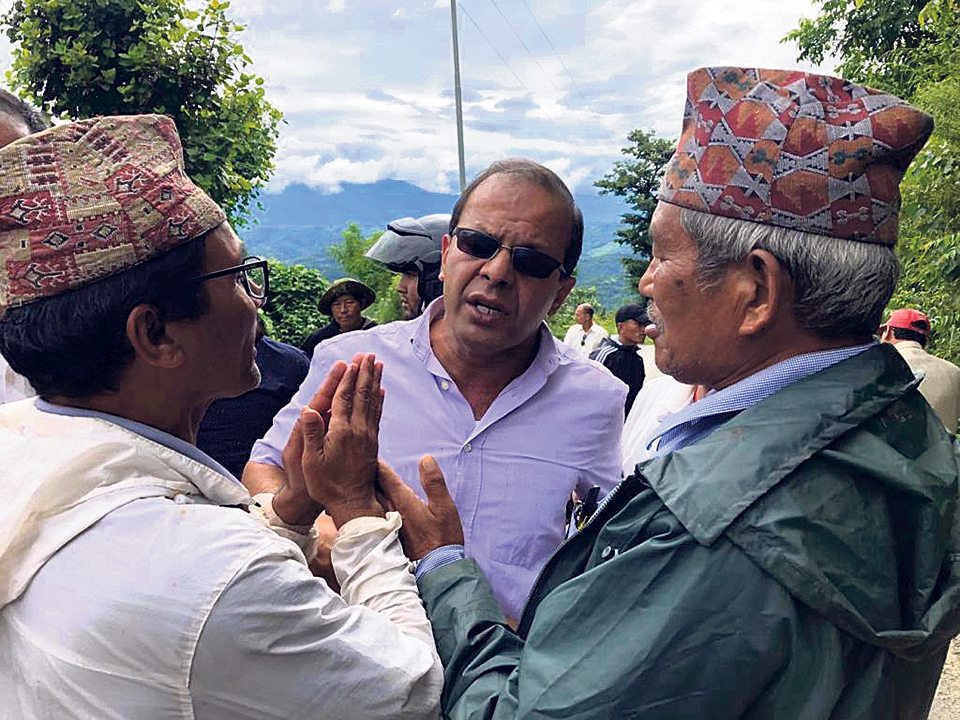 Nepali Congress leader Minendra Rijal (center) arguing with local cadres of the Nepal Communist Party who blocked his way at Pokhari Bhanjyang of Tanahun on Sunday.

TANAHUN, Sept 30: A day after alleged cadres of the ruling Nepal Communist Party (NCP) thrashed anti-corruption activist Gyanendra Shahi in Chitwan, Nepali Congress (NC) leader Minendra Rijal has faced obstruction from NCP cadres while he was on his way to attend a public function organized in Tanahun district on Sunday.

Leaders and cadres of NCP had placed obstacles at several places along the road to prevent Rijal from reaching the venue of the function.

Leader Rijal, who was scheduled to lay the foundation of a new building of Rishing Rural Municipality in Tanahun, was stopped at Pokhari Bhanjyang of the rural municipality for around three hours.

The cadres of the ruling NCP and other parties had tried to fell trees and block the road so that NC leader Rijal wouldn’t be able to attend the function.

“They stopped me from attending the function saying they oppose the construction,” he said.

Rijal however was allowed to attend the function after three hours of obstruction.

Agitating locals wanted Dhungade as the center of the rural municipality and construct the building there instead of Rishing.

“Dhungade is accessible for all. We have been demanding that the office of the rural municipality be set up at an accessible place,” said Ganja Sing Gurung, NCP’s Rishing Rural Municipality in-charge.

A year ago, a meeting of the rural municipality’s executive council had decided to construct the office building in Rishing.

But local units led by parties other than the NCP had opposed the decision.

They had called a general strike for Sunday, the day when the foundation-laying of the building was organized.

The NC has won all seats of the rural municipality.

Stating that the row over naming the center of the local unit was already settled through an all-party meeting, the rural municipality chief Rajendra Krishna Shrestha said the issue was over-politicized for political gains.

NC warns of stern protest
NC has expressed serious concerns over the obstruction caused on Sunday and threatened stern protests if such attacks continue. “Nepali Congress will be compelled to initiate stern protests against the authoritarian government if the vigilante type of attacks continue,” a press statement issued by NC’s Chief Secretary Krishna Prasad Paudel says, adding, “We want to warn NCP not to undermine a party like Congress and act responsibly.”

CHITWAN, Sept 29: Anti-corruption activist Gyanendra Shahi has been severely beaten in Chitwan while he was leading an anti-corruption demonstration... Read More...