KATHMANDU, Oct 19: Spokesperson of the main opposition Nepali Congress Bishwa Prakash Sharma has clarified that NC will facilitate in a fair and independent investigation into the murder case against suspended NC lawmaker Mohammad Aftab Alam.

Amid allegations against the government of attacking NC by reviving Alam case after twelve years by his party president Sher Bahadur Deuba, spokesperson Sharma, however, stated that his party always advocates for rule of law and will not deviate in this particular case as well.

Retweeting his older tweet reading ‘Guilty must not be exempted and the innocent should not be convicted’, he expressed his objection to Deuba’s statement. 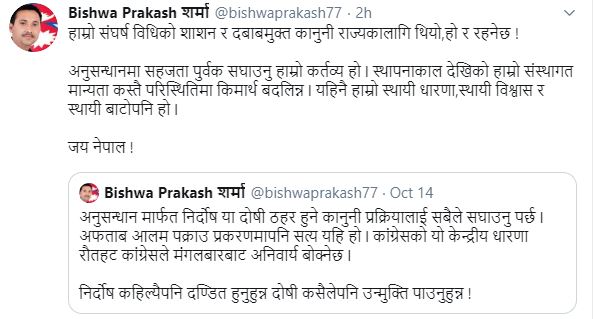 Sharma indicated that the statement made by the president is personal but not the official opinion of the party. “We struggled hard for the rule of law. We still stand by the very principle. It’s our sincere duty to facilitate an investigation against the accusation. Our institutional norms never change. And it is our perpetual opinion, permanent faith and pathway too,” Sharma said on Twitter.

Earlier, at a training program organized at Bode of Bhaktapur on Friday, NC President Deuba accused the incumbent government of hatching conspiracy against the Congress by arresting his party leader Alam after twelve years. Amid widespread criticism against Deuba’s remarks, party spokesperson underscored the need for maintaining rule of law in the country.

KATHMANDU, Dec 16: Mahasamiti members of the Nepali Congress have started putting forth their views on the proposals prepared on... Read More...

A chronicle of change
22 hours ago

Media Council bill can be revised, says Minister Baskota (with video)
14 hours ago