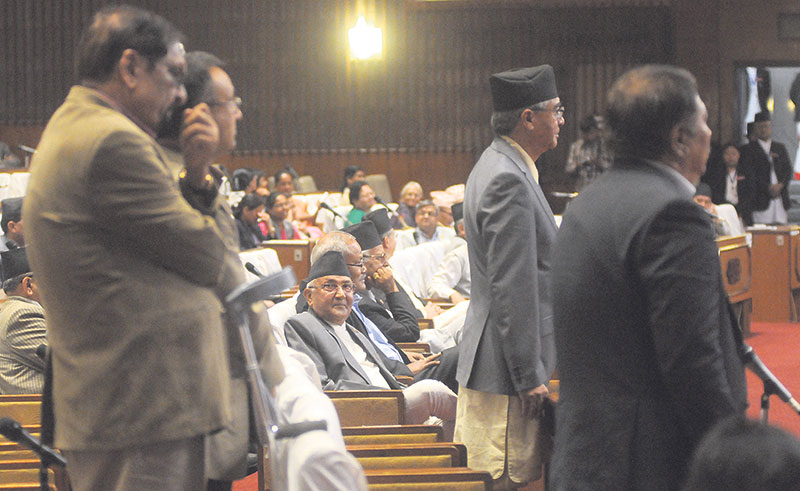 The party has sought the government's commitment in parliament to release the grant assistance in lump sum, but the government has been insisting that the grant can't be released as demanded by the opposition. After informal meeting between ruling CPN-UML and NC yielded no result, NC barred the prime minister from addressing parliament on Sunday as well.

"We are not here just to listen to the prime minister's speech. We will continue our obstruction until he promises to release the house reconstruction grant in lump sum," NC leader Bimalendra Nidhi said after the meeting.

NC leaders halted the House proceedings, by getting to their feet since the start of the meeting on Sunday. Speaker Onsari Gharti requested NC lawmakers to allow the prime minister to make his statement on the government's reconstruction and grant distribution plans and progress and on the killings of Nepali migrant workers in Afghanistan. But NC lawmakers expressed outrage saying that the government attempted to sideline NC demand by tying it with an emotional issue.

After the House meeting, Speaker Gharti said leaders from both sides have assured her that they will find an amicable solution to the issue by Monday noon before the resumption of parliament.

Minister for Law, Justice and Parliamentary Affairs Agni Kharel termed the NC's obstruction as undemocratic. "They did not allow the prime minister to address the House demanding that he should speak whatever the NC wants him to speak. This is undemocratic," said Kharel emerging from the House meeting.

KATHMANDU, Jan 22: The parliament’s meeting has been halted again for 15 minutes, the second time on Tuesday after Nepali... Read More...

Why did the people of Dharan elect independent Sampang as their mayor?
57 minutes ago