NC obstructs parliament, protests in the street against CIAA decision 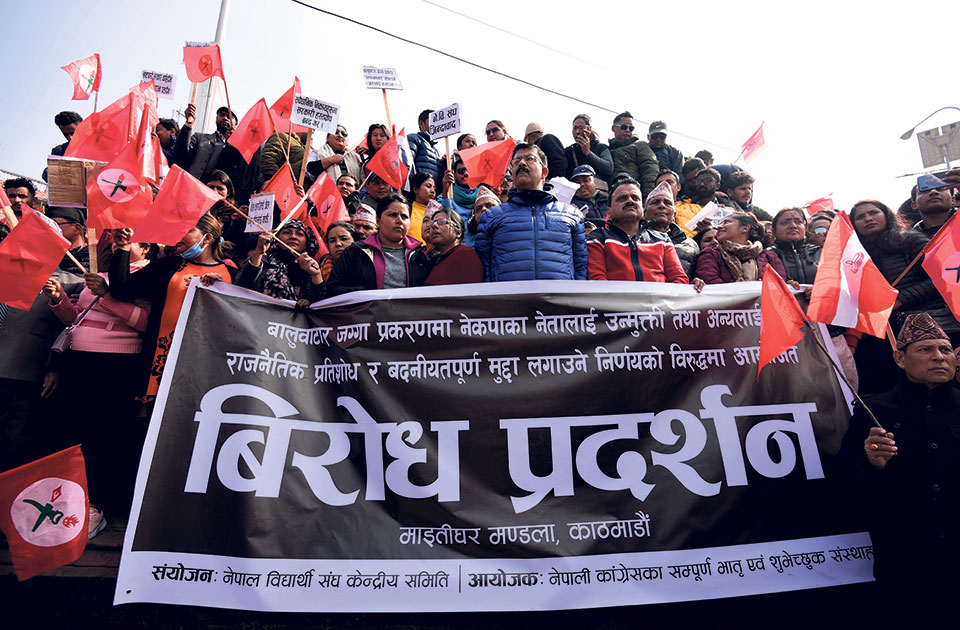 Sister organizations of the Nepali Congress stage a demonstration at Maitighar in Kathmandu on Friday after the Commission for the Investigation of Abuse of Authority charged their leader Bijaya Gachchhadar with corruption in connection with the Lalita Niwas land scam. Photo: Monika Malla/Republica

KATHMANDU, Feb 8: Main opposition Nepali Congress has protested in the parliament and in the streets against the ‘politically motivated’ decision of the Commission for the Investigation of Abuse of Authority (CIAA) to spare the ruling party leaders involved in the high-profile Lalita Niwas land scam.

Friday’s meeting of the parliament has been adjourned until Sunday after obstruction by NC lawmakers for a second consecutive day over the filing of charge sheet against its leader Bijaya Kumar Gachchhadar by the CIAA.

Briefing the House on the party’s decision to obstruct Friday’s meeting, NC lawmaker Min Bahadur Bishwakarma accused the CIAA of abusing its authority by exonerating some leaders of the ruling party who were equally involved in the scam.

On Wednesday, the CIAA had filed a corruption case against 175 individuals including NC’s Vice-president Gachchhadar for their involvement in capturing more than 136 ropani of government-owned land and registering it in the names of various private individuals.

“How is it possible to give clean chit to the prime minister who ordered the minister to table the proposal in the cabinet and the chief secretary who prepared ‘master plan’, and charge the minister of corruption?” Biswakarma said. “The CIAA itself has abused its authority.”

In the afternoon, sister wings of the NC staged demonstration at Maitighar Mandala to protest against the CIAA. Chiefs and office bearers of the NC’s sister wings including Nepal Students Union and Nepal Tarun Dal among others staged a sit-in for nearly two hours demanding fair investigation into the Lalita Niwas land scam.

Earlier, the NC had ordered its sister wings to organize street protests against the CIAA decision to file corruption case against its leader Gachchhadar.

“The CIAA decision to file case against Gachchhadar while exonerating the ruling party leaders is an act of political vendetta,” said NSU General Secretary Dipak Bhattarai.

Sister organizations of the opposition party have demanded that all those involved in the land scam should be charged with corruption and investigated.

Meanwhile, the Sajha Party also staged a demonstration outside the office of the CIAA against the “exoneration by the CIAA of ruling party leaders” involved in the Lalita Niwas scam. They were briefly detained by police.