Discussion on Budget in Parliament 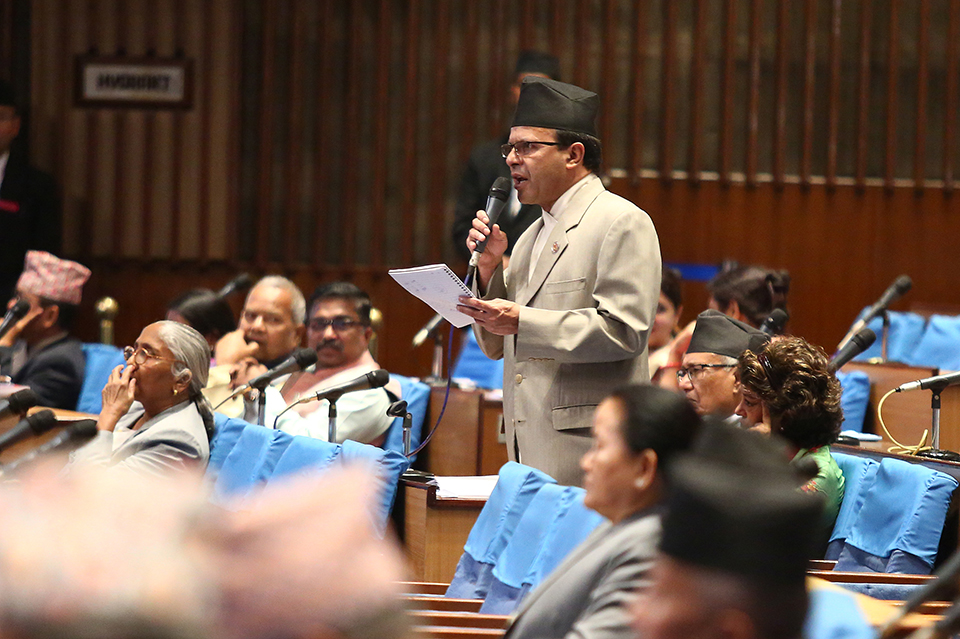 KATHMANDU, June 3: Nepali Congress has criticized the government for its failure to bring programs and strategies to speed up spending.

Though the government has been failing to spend budget, it is not bringing any specific and targeted programs to boost spending, lawmaker Minendra Rijal said in parliament on Sunday, sharing opinion of the main opposition Nepali Congress on the budget for the upcoming fiscal year.

“Overall spending figures in priority projects remain at only 2 percent as of mid-March. But the government did not bring any programs and strategies to enhance budget spending," he said.

Minister for Finance Yuba Raj Khatiwada tabled the budget in the parliament on Wednesday. None of the national pride projects have spent over 50 percent of the allocated budget in the current fiscal year so far, while all the targets, including electricity generation, blacktopping of roads, are far below the target, Rijal said, referring to the government's budget spending figures.

"The government had set a target of generating additional 800 MW of electricity in the current fiscal year, but it could generate only around 400 MW. Similarly, only 300 kilometers of roads have been blacktopped so far against the target of 1000 Km," said Rijal.

The central member of the opposition party also said that the Prime Minister Agriculture Modernization Project spent less than one billion rupees in the current fiscal year despite getting budget of Rs 4.77 billion. "Surprisingly, the government has doubled the project's budget to Rs 8.1 billion for the next fiscal year," he said, accusing the government of preparing budget in an ad-hoc basis.

Commenting on the decision to increase budget for Constituency Infrastructure Development Fund to Rs 60 million, Rijal said that lawmakers of both ruling and opposition parties had no choice but to lobby for the fund because of arbitrary budget allocations in constituencies of only the high-profile leaders.

The main opposition has also criticized the government for counting revenue generated from demand created by remittance earners and introducing distributive programs based on that revenue.

The government's source of revenue of about Rs 400 billion for the next budget is estimated to be collected at the customs point. Rs 100 billion out of this amount come from the demand created by the remittance.

The government has indirectly planned distributive programs like allowance for elderly people from indirect tax paid by the remittance earners. "It is not a sustainable way of planning the budget," Rijal argued.

The discussion on budget in parliament will continue on Monday as well.

KATHMANDU, June 3: Deliberations on the policy, objective and principals of the fiscal year 2019/20 budget estimates began at the... Read More...

KATHMANDU, June 3: Main opposition Nepali Congress has criticized the government for its failure to spend budget allocated for the Prime... Read More...