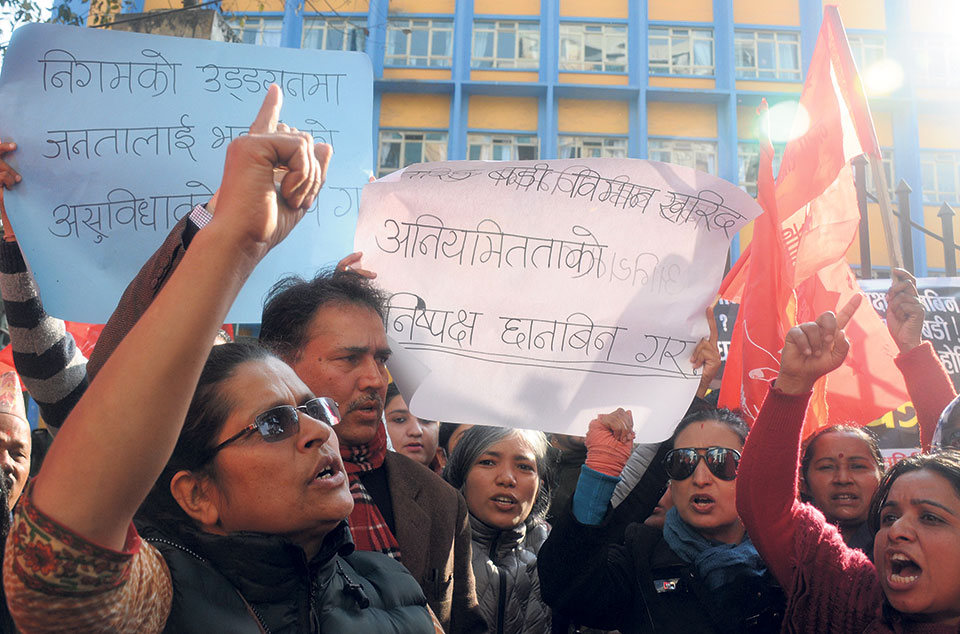 “The concerned authorities are conducting investigations on this issue. But we sense that all this is a ploy to weaken the NAC. Our protest is aimed at saving the NAC and punish the real culprit,” said Manushi Yami Bhattarai, Kathmandu coordinator of the party.

According to Bhattarai, the major demands of Friday’s protests were: impartial and transparent investigation of the aircraft procurement process, reform of Public Procurement Act, and protection of the NAC from vested interest of different quarters and individuals.

“As the national flag carrier, the NAC has to be strong. Only then it can contribute to the country’s economy. Such controversies have to be sorted out as soon as possible because it could affect the overall image of NAC,” she told Republica, adding that the wanted to see NAC becoming strong and free from the clutches of corrupt people.

Bhattarai also said that investigation reports should be published so that public knows of the real story.

“Indeed, there is urgent need for reforming the NAC management system,” she said adding, “Wrong management has been weakening the airlines for long.”

Meanwhile, raising question over the procurement process, Hisila Yami, former tourism minister and leader of the party, said that there was no need of purchasing aircraft from the third party.

Parliament’s Public Accounts Committee (PAC) and International Relations Committee along with the Ministry of Culture, Tourism and Civil Aviation have been investigating the issue of wide-body aircraft purchase.

While the International Relation Committee has formed a five-member sub-committee for further investigation, the PAC has directed Public Procurement Monitoring Office (PPMO) to go through the legal aspects of wide-body procurement process.

Likewise, issuing a white paper on November 15, the NAC had asked the government for financial help for operation of the wide-body aircraft.

However, both the ministry and NAC has been arguing that they have gone through all legal process for aircraft purchasing and no embezzlement has happened during the procurement. The first wide-body craft of the NAC had landed in Nepal on June 28 this year and the second one landed on July 26.

The national flag carrier operates flights to Delhi, Doha, Dubai, Hong Kong, Kuala Lumpur, Bangkok, Mumbai and Bangalore and to domestic destinations in 25 districts across the country. The NAC’s existing fleet comprises 14 aircraft of which only eight are in operation at this moment.

KATHMANDU, Sept 19: A committee formed by the government a month ago to bring reforms in Nepal Airlines Corporation (NAC)... Read More...

KATHMANDU, Jan 24: Tourism entrepreneurs have said that investigation on the procurement of wide-body aircraft is damaging the image of... Read More...