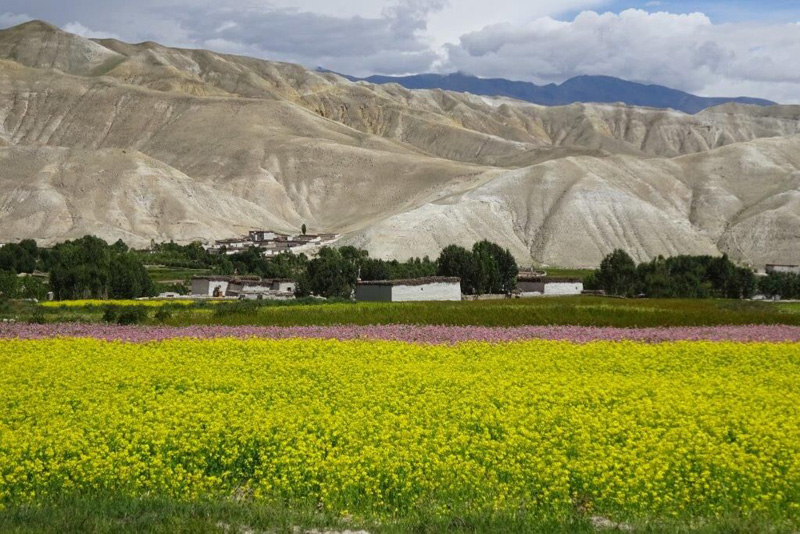 The snow leopard is a flagship mountain species found in the Karakoram, Hindu Kush, and Himalaya ranges spanning across Afghanistan, Pakistan, China, India, Nepal, Bhutan, and Myanmar. Although an elusive animal, the snow leopard draws many tourists to these mountain ranges.

The naturally dammed lakes of Band-e-Amir National Park in Afghanistan attract tourists from all over the world to the country’s Bamyan Province. In Pakistan’s Gilgit-Baltistan, the prospect of trophy hunting markhor, a wild goat famed for its twisted horns, attracts many tourists each year. In China’s Hongyuan Grassland in Sichuan Province, highland pastures showcase aspects of the nomadic Tibetan lifestyle to tourists.

As its name suggests, the Valley of Flowers in India’s Uttarakhand State attracts numerous tourists with its diversity of flowers, of which there are more than 500 species that include wild poppies, asters, and orchids, among others. The one-horned rhinoceros in Chitwan National Park, Nepal, attracts more than 100,000 tourists every year.

In Bhutan’s Phobjika Valley, the black-necked crane festival, organized annually since 1998, plays an important role in attracting tourists to the country, particularly during the month of November. Inle Lake, with its stilt houses, floating markets, and floating gardens, is an important tourist destination in Myanmar.

Tradition and tourism
Biodiversity plays an integral role in the daily lives of indigenous peoples in the HKH. Biodiversity is a source of food, clothing, shelter, and medicine for many communities. Interestingly, such traditional uses of biodiversity form the very essence of tourism in many places in the HKH.

The residents of Hunza Valley in Pakistan rely on organically grown local food, which is believed to contribute to their long life and good health. Hunza apricots, in particular, are now popular among visitors to the valley, and a taste of the traditional apricot soup, Haneetze Duodo, is an essential culinary element in the Hunza Valley tour itinerary.

Almost two centuries ago, the Khasi tribe in Meghalaya, northeast India, learned to train the roots of rubber trees to build sturdy bridges that could survive many years in a wet and humid environment.

Some of these bridges continue to survive, and today, experiencing these ‘living’ bridges is a must for many tourists visiting Meghalaya.

The use of plants and animals in traditional medicine dates back many centuries to the practice of Ayurveda. In the high mountain regions of India, Nepal, Bhutan, and the Tibet Autonomous Region in China, this traditional medicinal practice is known as Sowa-Rigpa. Many travelers visit the HKH to practice and learn these ancient medical techniques. For the slightly curious visitor, a tour of the National Institute of Traditional Medicine in Thimphu, Bhutan, could be most enlightening.

Leaving footprints
While it is biodiversity that attracts tourists, tourism itself can have a significant negative impact on biodiversity. Tourism infrastructure, including buildings, campsites, roads, trails, and bridges are sometimes constructed in pristine areas by clearing vegetation and excavating land. These activities can potentially lead to biodiversity loss.

The practice of collecting wild plants and animals either by local communities to sell to tourists for food or souvenirs, or by the tourists themselves, is also likely to put pressure on biodiversity. Mushroom, fern, bamboo shoot, fish, and wild honey are some natural products that, if not sustainably harvested, face the threat of resource depletion.

Tourism is also responsible for the introduction of many alien species ie, plants or animals that do not naturally occur in a given environment. They may be intentionally introduced: for instance, new fish species may be introduced to a natural lake to promote fishing, or flowers and trees may be planted for ornamental, economic, or functional purposes. Or, they may be accidentally introduced:
the seeds or spores of some plants may be transported to new areas via vehicle tires or visitors’ luggage, clothes, and shoes. Alien species that proliferate in these new environments, ie those species that become invasive, can outcompete local, naturally occurring species, resulting in ecological changes, including biodiversity loss.

Solid waste and its mismanagement are serious threats resulting from tourism in the HKH. Since the turn of the century, Mount Everest has gained notoriety for the waste that mountaineers have left behind after their expeditions. Other tourist destinations in the HKH also face similar challenges not only from solid waste, but also from sewerage. Discharge from toxic solid wastes and inadequately treated sewerage can seep into the ground and pollute groundwater and other water bodies. This affects not only biodiversity such as fish and aquatic plants, but also local residents—and tourists— who rely on groundwater for domestic or agricultural purposes.

A new leaf
Understanding that biodiversity is the basis for many tourism activities in the HKH is conducive to ensuring that this tourism base is maintained in the long term. There are already proven conservation success stories interlinked with tourism. For example, revenue from tourism has contributed to reviving populations of markhors in Pakistan, rhinos in Nepal, and black-necked cranes in Bhutan.

National policies are in place in the HKH to conserve natural resources that form the basis for tourism. Moreover, global guidelines have also been developed to achieve sustainable tourism development. The Convention on Biological Diversity’s Guidelines on Biodiversity and Tourism Development provide a framework to make tourism and biodiversity more mutually supportive. The engagement of the private sector and local communities is especially necessary for the promotion of tourism based on the sustainable use of biodiversity.

Such an approach benefits both local communities that rely on natural resources for their livelihoods, in addition to tourism, as well as travelers who are now increasingly favoring tourism that is both environmentally and culturally friendly.

With nearly 71.5 million tourists visiting every year, tourism in the HKH plays a potentially significant role in addressing poverty through the creation of jobs, skills, and income for thousands of people.

Meanwhile, conservation and the sustainable use of biodiversity is essential for providing long term benefits to the region’s residents.

Gurung (Janita.Gurung@icimod.org ) is Biodiversity Conservation and Management Specialist in the Ecosystem Services and Lama (Anu.Lama@icimod.org) is Tourism Specialist in the Livelihoods at International Centre for Integrated Mountain Development, ICIMOD

Myagdi : Nature at its best

Cradled in the laps of the Himalayas, Myagdi district in Dhaulagiri zone is one of the most beautiful places in... Read More...