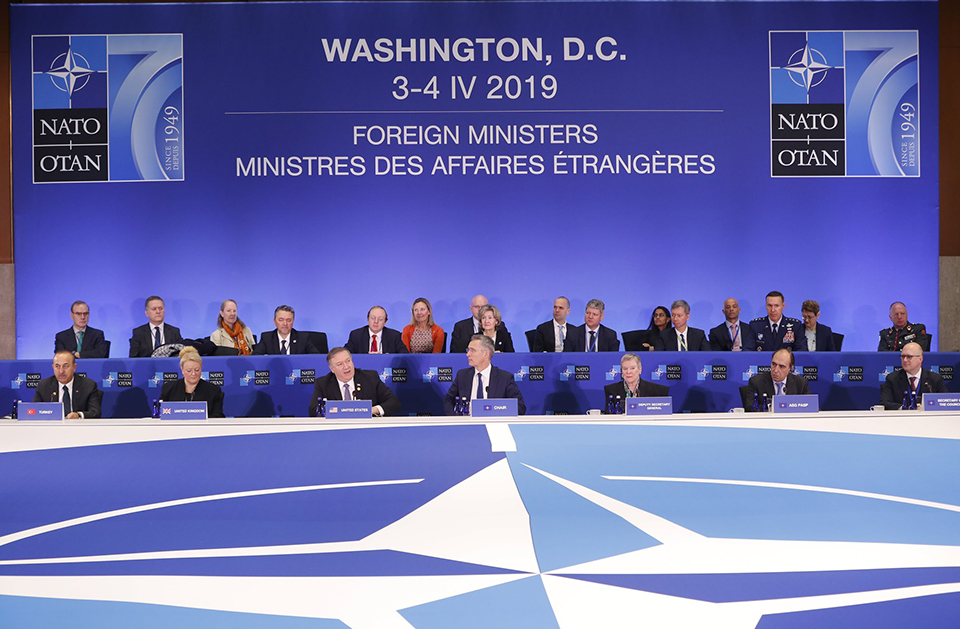 Secretary of State Mike Pompeo opened the meeting with an appeal for unity to confront “great power” challenges from Russia, China and Iran. He hailed NATO’s deterrence of the Soviet Union during the Cold War and said the alliance was well positioned to move forward even as it confronts new and evolving challenges.

But a deepening dispute with Turkey over its planned purchase of a Russian air defense system and U.S. demands for allies, particularly Germany, to boost their defense spending threatened to overshadow the proceedings.

“We have rightly sought peace through strength here at NATO,” Pompeo said. “We must continue to do so, especially in this new era of great power competition from Russia, from China, and the Islamic Republic of Iran.”

Addressing those challenges and others such as terrorism, cybercrime, uncontrolled migration, threats to energy security and new technologies will require enhanced resources, he said.

Pompeo said every NATO member had an obligation to explain to its citizens the need to increase their defense budgets and rejected what he called “tired arguments” about public opposition to such spending.

“These are real challenges, to be sure, and now is not the time to repeat tired excuses that our citizens don’t support increased defense spending or security spending,” he said.

Pompeo said convincing citizens “of the importance, the relevance, the intrinsic centrality of this institution” is “a key step in confronting these threats head on.”

In an address to Congress on Wednesday , NATO Secretary General Jens Stoltenberg acknowledged serious divisions within the alliance and called for bigger defense budgets to cope with global challenges such as Russian assertiveness, the core reason NATO was created in Washington 70 years ago this week.

President Donald Trump has questioned the value of the alliance and suggested that some members are freeloaders.

Pompeo did not address the spat with Turkey in his remarks, but on Wednesday in a meeting with Turkish Foreign Minister Mevlut Cavusoglu had made clear Washington’s displeasure with Ankara for insisting it would go ahead with plans to buy Russia’s advanced S-400 system instead of the American Patriot system.

The Trump administration is threatening to stop delivery to Turkey of the newest U.S. fighter jet, the F-35, and has already halted the transfer of parts and manuals to the Turks, if the purchase is completed. Vice President Mike Pence had delivered the same warning, noting that U.S. and other NATO members had grave concerns about the S-400 as it is not interoperable with alliance systems.

“Turkey must choose,” Pence said Wednesday. “Does it want to remain a critical partner in the most successful military alliance in the history of the world or does it want to risk the security of that partnership by making reckless decisions that undermine our alliance?”

Cavusoglu and other Turkish officials say they are proceeding with the deal because the need is urgent and the Patriots could not be delivered for another decade. They have also said the S-400 is not intended to work with NATO systems and will be a purely stand-alone defensive mechanism.

Meanwhile, Canada’s Foreign Minister Chrystia Freeland took the opportunity of the NATO meeting to register Ottawa’s displeasure with being labelled a potential national security threat by the U.S. in relation to steel production. She called the designation, which has led to the imposition of tariffs on Canadian steel, “absurd” and pointed to her presence at the NATO meeting as proof that Canada is not a threat to the U.S.

“We really think this is groundless,” she told reporters.

KATHMANDU, Feb 18: In a meeting of the House of Representatives today, lawmakers put questions before Minister for Education, Science... Read More...

Some pictures from Teku Hospital: Patients are treated at corridors as hospital runs short of beds
55 minutes ago