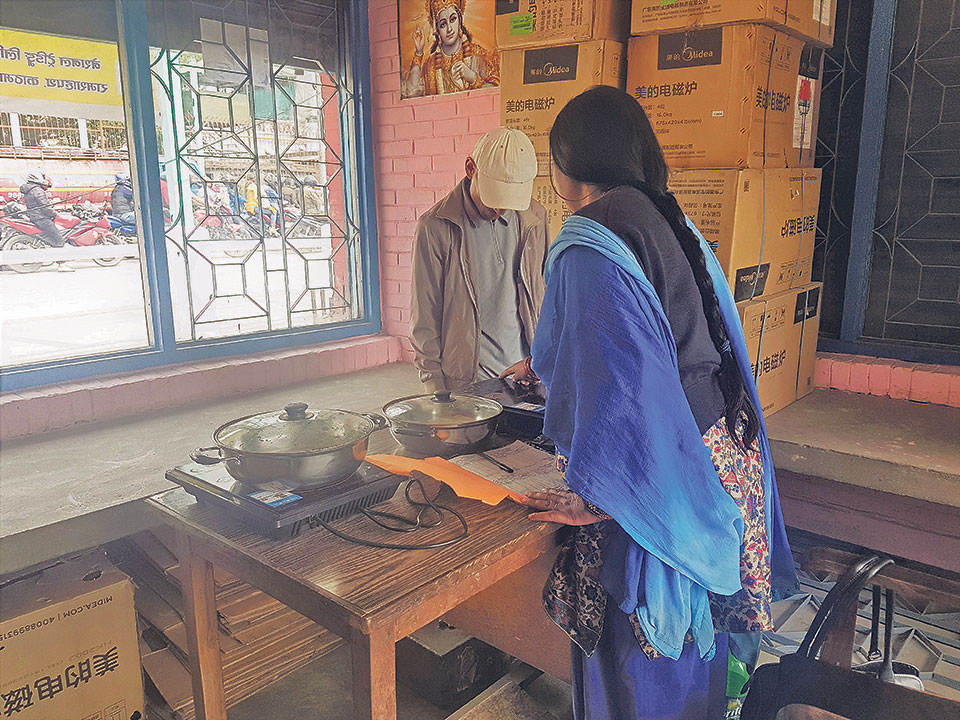 KATHMANDU, May 16: National Trading Ltd (NTL) has been selling induction cooktop stoves provided on grant by China for Rs 4,000 per unit for the past one month.

Nearly a third of the 11,300 stoves received from China have already been sold, a data of NTL shows. NTL has been selling induction stoves from its outlet in Ram Shah Path, Kathmandu, from April 15.

According to NTL, 3,670 induction stoves have been sold to consumers so far. It has another 7,500 stoves in stock.

Kamala Thapa, who sells these stoves at NTA, told Republica that three to four units are being sold every day. “Although these stoves are of premium quality, we have not received customers as expected,” she said, adding that the stoves, which cost around Rs 12,000 per unit, are being sold at Rs 4,000.

Jaya Ram Parajuli, who was at the NTL outlet to purchase induction stove, told Republica that he has been using induction stoves since the Indian blockade of 2015. “As my stove is no longer working, I am here to buy a new one,” he said, adding: “I have found induction stoves more convenient than the typical gas stoves. In addition to being eco-friendly, it is economical and safe.”
“While a cylinder of gas, which lasts for around a month, costs us Rs 1,500, using induction stove adds only Rs 500-Rs 600 to our monthly electricity bill, making it economical.”

Another customer Sangita Awale, however, said that she was having a hard time operating the stove its buttons have labels in Chinese language which is impossible for a common Nepali to comprehend.

Purna Shankar Basi, general manager of NTL, said that they had to reduce price of the stove as other induction stoves are available for around Rs 5,000 per unit. According to Basi, the reason behind the decreased demand for induction stoves was that people starting using other electric devices to prepare food after Nepal Electricity Authority (NEA) put an end to scheduled power cuts as induction heaters require specially made utensils which are quite expensive in the market.

“Also, we have not published any advertisements to inform public about the sale. Many people still do not know that we are selling induction stoves gifted by China at a discounted rate,” Basi added.
With news of the government dismantling National Trading Limited doing rounds, NTL has not been able to publish advertisements regarding the sale in mass media. “We expect that the upcoming budget will decide the fate of the NTL,” he said, adding: “After that, we will publish advertisements and also dispatch these haters to our branch offices across the country.”

The Chinese government had gifted 11,300 induction stoves to Nepal as part of assisting Nepalis who were suffering from acute shortage of cooking fuel due to unofficial blockade imposed by India in 2015.

KATHMANDU, Aug 24: As many as 290 employees at the National Trading Ltd have gone on a strike demanding six... Read More...