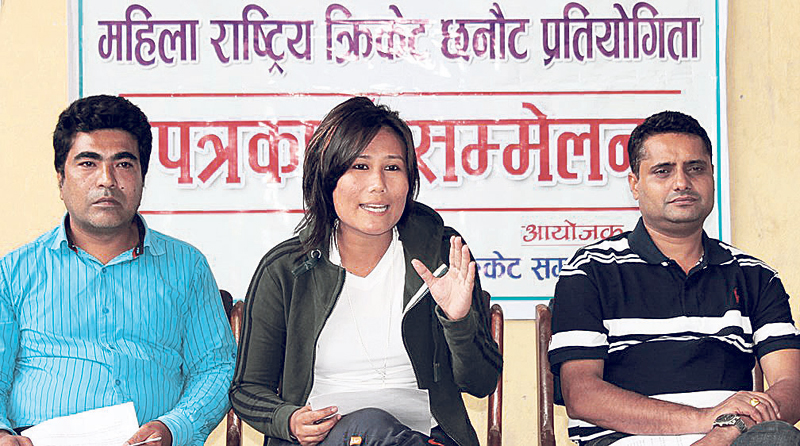 KATHMANDU, July 23: National Sports Council (NSC) has cut short the Women's National Cricket Selection Tournament at the Tribhuvan University Ground in Kirtipur as the ground will be used by the men's team. The tournament being organized to pick the players for the ICC Women's World Cup Qualifier (Asia) will begin on Saturday and finish on Tuesday, much before the planned date.

Seven matches of the T20 format are scheduled to be played within four days. The first three days will see two matches each and there will be only one mach (final) on the last day of the tournament. Participating teams - Armed Police Force (APF), Central and Mid-western regions have been pitted in the Group A while Eastern, Western and Far-western are in the Group B.

“Concluding the tournament within a short period is the only option as we cannot use the TU Ground for a longer period because men's team will begin its closed-camp training for the ICC World Cricket League Championship at the same ground within a few days. Pulchowk ground is not in a playable condition,” said Sudeep Sharma, member of the coordination committee, during a press meet in Kathmandu on Friday.

National team coach Jagat Tamata had announced to start the closed-camp training from July 24 before the team's departure for England tour. The team is scheduled to visit the Netherlands for two-leg matches of the ICC World Cricket League Championship scheduled for August 13 and 15.
Meanwhile, women's national team skipper Rubina Chhetri, who is captaining the Eastern region, said that the women's team has been facing discrimination in comparison to their male counterparts on facilities, including ground, from the concerned bodies.

“The women's team has also achieved success at international level in the past compared to recent years. However, the concerned bodies have not valued us and it is sad that the women's team has been discriminated on the matters of facilities,” said Rubina, who, however,  expressed delight for organizing the selection tournament after a long gap.

“Enough matches would have helped us improve our performance,” she added.

Similarly, weather condition will be another challenge for the host to conduct the tournament and pick up the players for the closed-camp training.

“In case matches are not played, then the players will be picked up based on their performances in the regional and district-level tournament played for the national event,” said Sharma.

In the opening day on Saturday, APF will play against Central and Eastern will face Western.

ANFA to organize U-18 football tournament and women's league

KATHMANDU, May 26: All Nepal Football Association (ANFA) announced on Friday that it will host two tournaments including Lalit Memorial Youth... Read More...